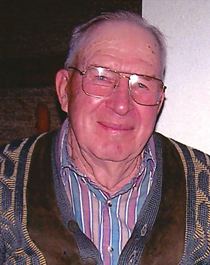 Harold Winters (94) departed this earthly life September 23 after lengthy illnesses and many hospital stays. He passed away peacefully at his home in Burlington, WY. Most of his children had been able to visit with him that day. His funeral will be held October 8 at 10:00 am at the LDS church in Burlington. Interment will be at the Burlington cemetery. Harold was born August 31, 1922 in the little town of Otto, WY. His parents were Niels Winters and Esther Dalley Winters. He was the seventh child in a family of eight. Haroldâ€™s family lived on a farm about 12 miles East of Otto, WY. They raised beans, grains, and hay. They also raised chickens, turkeys, and a few cows for milk. Harold got to help with various chores like weeding beans, hauling hay, and milking cows. For fun, Harold enjoyed trapping and going on fishing and hunting trips with his brother Donald. He later enjoyed these activities with his own sons. Harold liked to tell about one particular hunting trip that had an unusual twist. As he got older he would often stay in camp while his sons went out and did the hunting. One time as he was sitting in his lawn chair at their camp, dozing the time away while waiting for the others to return, he was startled by a noise and on looking about discovered a bear walking through camp! His gun was close by and he was able to grab it and shoot the bear. He got his quota without even leaving camp! His trophy later adorned a guestroom wall. Haroldâ€™s schooling included eight years at the Otto school, 4 years of high school â€“ one in Basin and three in Greybull, and one year at the College of Agriculture in Laramie, WY. Harold was 28 years old when he met and married Annie Aagard Jones. They were married in the Idaho Falls Temple where his brother, Francis, was in the temple presidency. Harold was an active member of the Church of Jesus Christ of Latter Day Saints all his life. He served in various callings including: ward clerk three times, Bishopâ€™s counselor, High Priest group leader, home teacher, and Scout master. He also served on the school board and was a 4-H leader. Harold said he was grateful for the experience of being a father and that he owed much in his life to his wife and children. He always desired the best for them. Harold really loved the land and farming and was a farmer all his life but his greatest love was music. He had a beautiful voice and he and his brother, Donald, were in great demand. They sang in choirs, church groups, and at many wedding receptions and funerals. As Harold said, â€œThe departed didnâ€™t seem to complain and everyone seemed to know we wouldnâ€™t refuse a chance to sing.â€ The following words, written by Harold, are a fitting ending to his mortal life: â€œIf there are any accomplishments in my life worth remembering, it is due to my family. As the years add up, the following things seem to become more important: life, family, love and understanding, knowledge and intelligence, health, and the good earth. The fountain of youth is still a desire, and life everlasting seems especially important.â€ Harold is survived by his wife, Annie Winters, his children: Brent Aagard Winters (Judy), Stephen Aagard Winters (Mary), Norman Aagard Winters (Marla), Eileen Aagard Jensen (Heber), and two step-daughters: Gayla Jones Zeitner (Larry), and Karen Jones
Preator (Mike). Also included are 31 grandchildren and numerous great and great-great grandchildren.
To send flowers to the family in memory of Harold Dalley Winters, please visit our flower store.
Send a Sympathy Card