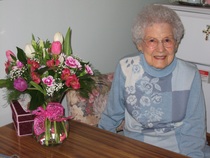 Donna, a long-time Powell resident passed away on December 12, 2015 at the age of 99.  At the time of her death, she was a resident at the Powell Valley Care Center.  Donna was born in Powell on February 24, 1916 to Bertrum E. Steck and Eva Werts Steck.  She graduated from Powell High School with the Class of 1934.

Donna married Bud Nielsen in February of 1935.  Bud and Donna had two boys;  Ted and Jerry Nielsen who both attended Powell schools.  Donna started working when her two boys were in their teens.  She worked for Drs. Dunleavy and Giever starting in 1954, then later worked for Drs. Kattenhorn, Balkins and Deiss for many years.  Bud Nielsen died in February 1970.  Donna sold her farm house in 1977 and moved to Tucson to live near her children and grandchildren.  In 1980 Donna met and married Bill Irestone in Tucson and they later moved back to Powell.  Bill Irestone died in August 2001.

Donna was life long member of the Union Presbyterian Church and served as an Elder for a period of time.  She was a member of EPASC Club and Eastern Star.  Donnaâ€™s hobbies included gardening, cooking, knitting and she enjoyed playing golf for many years.

Funeral services will be held at the Union Presbyterian Church in Powell on  December 16at 2:00 pm, with internment to follow at Crown Hill Cemetery. Viewing will be from 1-1:45 at the funeral home prior to services at the church.

To send flowers to the family in memory of Helen Donna Irestone, please visit our flower store.
Send a Sympathy Card