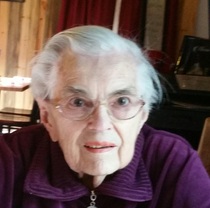 Jacqueline I Steiner of Powell passed away on Sunday, March 27, 2016, at the Powell Valley Care Center.  She was 87.

Jacqueline was born on June 1, 1928 in Boone, Iowa, to Edward and C. Marguerite (Leguire) Scott.

She worked for Collins Radio in Cedar Rapids, Iowa.  On September 28, 1952, she married Clifford J. Steiner in Honolulu, Hawaii.  The couple lived in Cedar Rapids, Iowa.  Jacqueline had a fabulous â€œgreen thumbâ€, and she grew the most beautiful cactus that bloomed faithfully.  She enjoyed painting and sharing the painted pictures with the Boy's and Girl's Club.  She really liked playing Pinochle at the Senior Center, and looking for and collecting fossils and rocks.  She belonged to the Shoshone Rock Club. She liked baking, and cookies and cakes were her specialty.  She loved to spend time with her family, and enjoyed watching Lawrence Welk and Daniel Boone on television.  Jacqueline was a very loving wife, mother, mother-in-law, grandmother, and great-grandmother.

She was preceded in death by her husband, Clifford J. Steiner; daughter, Lynne Carr; and her parents.

Arrangements are being handled by Thompson Funeral Home.
To send flowers to the family in memory of Jacequeline I Steiner, please visit our flower store.
Send a Sympathy Card