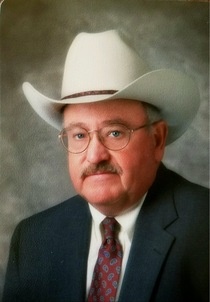 
Jack Tracy Turnellâ€™s wife, daughters, and grandchildren all gathered as he danced his way to Heaven from  â€œA Wonderful Worldâ€ on March 19, 2017. He was born in Riverton, WY, November 13, 1945 to Ralph and Emogene Turnell.  After his fatherâ€™s death, his mother married Marsh, who raised Jack as his own. Jack spent his younger years in Meeteetse and Grass Creek, graduating from Meeteetse High School in 1964. He met his lifelong dancing partner, Lili Abarr, and they were married in 1965. Jack attended NWC and the University of Wyoming School of Ag, graduating in 1970, and taught ag in Encampment for one year.  In the summer of 1971, Liliâ€™s grandmother, Frances Phelps Belden, asked him to come home to manage the familyâ€™s Pitchfork Ranch.
Jack and Lili were blessed with three daughters: Tracy, Cindy, and Tammy. They loved spending time at Jack Creek Cabin and Haymaker Cabin, putting cows on the mountain with friends and family, and working the cattle at branding and weaning time. He will be fondly remembered going out to gather cattle, atop his horse, Skipper, and with his dog, Dixie, following behind. In the manner that he taught his children and grandchildren to strive to do their best, he worked to do the same for the ranch and the ag industry.  As a progressive cattleman, he was on the cutting edge; using DNA testing and carcass data.  He enjoyed putting together a successful Quarter Horse breeding program.
Jack had a great passion for the land and worked with the UW range department to improve the range, watershed, and riparian areas for the benefit of cattle, wildlife, and multiple use. After the sale of the Pitchfork in 1999, he retained ownership of the lower ranches, forming Turnell Cattle Company and leasing back the Pitchfork for 10 years.
Throughout his life, he served on numerous bank boards and was an agricultural representative to the Federal Reserve Advisory Board of Kansas City. Conservation was always at the forefront of his mind and he served on the Black Footed Ferret Advisory Board and was the first recipient of the National Cattlemenâ€™s Beef Association Environmental Stewardship Award in 1991 for his work with the black footed ferrets.  A few of his many accolades include: Chevron International Conservation Award, Riparian Stewardship Award (BLM), Guardian of the Grasslands Award (WY Stockgrowers), Take Pride in America Award, WY Game and Fish Landowner of the Year, Outstanding Man of the Range (Society of Range Management), US Fish and Wildlife Service and Department of the Interior Award. He was recognized by Senator Malcolm Wallop on the floor of the Senate in Washington D.C. for his conservation efforts. He was honored as a UW Outstanding Ag Alumni. Jack enjoyed politics and was a Wyoming Delegate to the Republican National convention in 1988.
Many lifelong friendships were made while serving on the following boards:  American Salers Association (President), International Salers Association (VP), NCBA (National Cattlemenâ€™sâ€™ Beef Association) Board of Directors, WY Stockgrowers Association (President), UW Environmental and Natural Resources Board, WY 4-H Foundation, Northwest College Board and Foundation, and UW Cowboy Joe Club Director.
Having a great love for history, he co-authored Brand of a Legend, marking the 100th anniversary of the Pitchfork Ranch, and the following year again co-authored Lady of a Legend with Bob Edgar.  They received the Wyoming State Historical Award for Brand of a Legend in 1979. In order to preserve the history of the Pitchfork Ranch and the photography of Charles Belden, he was instrumental in starting the Belden Museum in 1992.  With others, he helped form the Meeteetse Museum District and combine the Meeteetse Museum and Belden Museum.
Jack always loved dancing, hosting and attending parties, traveling (along with planning where to have the next great meal), deep sea fishing, showing off his â€˜57 Chevy, and Christmas lights. He took great pride in his family. He could be a man of few words, UNLESS given the opportunity to give a speech!  He believed in giving back to the community.  It was important to him to stay in touch with family and friends (near and far).
His family has very fond memories of him singing Louis Armstrongâ€™s, â€œWhat a Wonderful World,â€ his imitation of a chicken cackling, talking like Donald Duck, whistling â€œReveille,â€ and cooking a mean fried egg or a GIGANTIC pot of ham and beans.
Jack was preceded in death by his parents, brother Von, and sister Sandy Roussan. He is survived by his wife, Lili, daughters Tracy (Joe) Thomas, Cindy (Jeremy) Cox, Tammy (Neil) Schlenker and grandchildren: Stormi Thomas, Tanner Thomas, Austin Cox, Kaili Cox, and Darbi Schlenker; soon-to-be great-grandaughter, Zariaya; sister Verna (Don) Deitchler; sister Marsha (Craig) Skillicorn; and many nieces and nephews.
We would like to invite you to attend a  celebration of life to be held on Saturday, June 3 at 2 PM at the Whit Ranch (75 RD 4EU, Meeteetse, WY).
In lieu of flowers, memorial donations can be made to: Wyoming Stockgrowers Endowment Trust (PO Box 206, Cheyenne, WY, 82003), The Meeteetse Museum Foundation Endowment Fund (PO Box 183, Meeteetse, WY 82433), or The Meeteetse Senior Center (PO Box 461, Meeteetse, WY 82433).
To send flowers to the family in memory of Jack T Turnell, please visit our flower store.