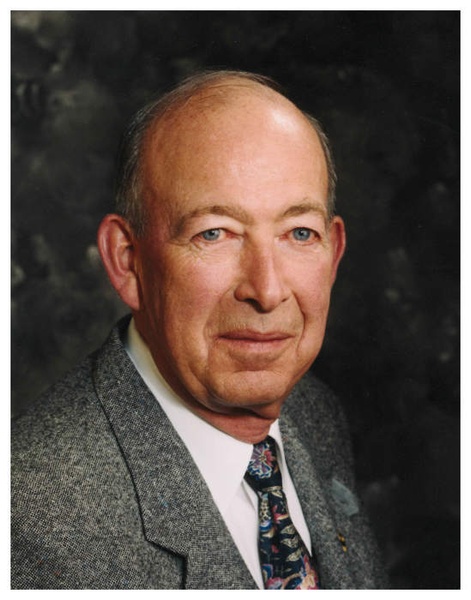 Powell was nearly a life-long home to James Lee Milburn. He loved it, and he served it.

Jim was twice elected Mayor of Powell, serving eight years between 1997 and 2005. He died May 20, 2018, in Mayo Clinic Hospital in Phoenix, Arizona, just as he was ready to return to Powell from his winter residence in Casa Grande, Arizona, and one week after his 80th birthday.

He was born May 13, 1938, in Billings, Montana, son of James W. and Katherine E. (Lee) Milburn. He was born into a family of educators, and it was no coincidence that he made it his own life’s career. His father was a former superintendent at Deaver.

Jim moved with his family to Powell before he entered the first grade, and he attended Powell schools through his Powell High School graduation in 1956.

He started college before serving three years in the U.S. Army, during which time he was stationed in Ansbach, Germany. There, he met and married Elfriede Husslein on Dec. 10, 1959. They lived in Germany until he completed his military service in 1961, and they returned to the Powell area.

He took an elementary teaching position in the sixth grade at Cody in 1964. He taught there for three years and then was hired as the University of Wyoming Extension Coordinator at Northwest College, a position he held from 1967-1995. During his 28 years as a UW field coordinator in Powell, he introduced hundreds of practice teachers to the field of education in Big Horn Basin schools.

He was a member of Elks, American Legion, Eagles and Masons. His community service was recognized with a Wyoming Association of Municipalities citation, a Citizen of the Year award by the Powell Masons and a Distinguished Service Award from Powell Hospital and Lutheran Hospitals & Homes Society.

His hobbies included fixing, restoring and tinkering with clocks and cars.  He had a keen fondness for collector cars and sports cars, and he completely restored a Model A Ford. He was a fisherman and gun hobbyist and looked forward to morning coffee with “the guys,” with whom he shared many jaunts of 4-wheeling.

Memorial services will be conducted Friday, June 1, 2018, at 10 a.m. in the Yellowstone Building on the Northwest College campus. Private family interment at Crown Hill Cemetery will follow at a later date.

For those who wish, memorials to Caring for Powell Animals, P.O. Box 504, Powell, WY 82435 would be appreciated by the family.

To send flowers to the family in memory of James Lee Milburn, please visit our flower store.