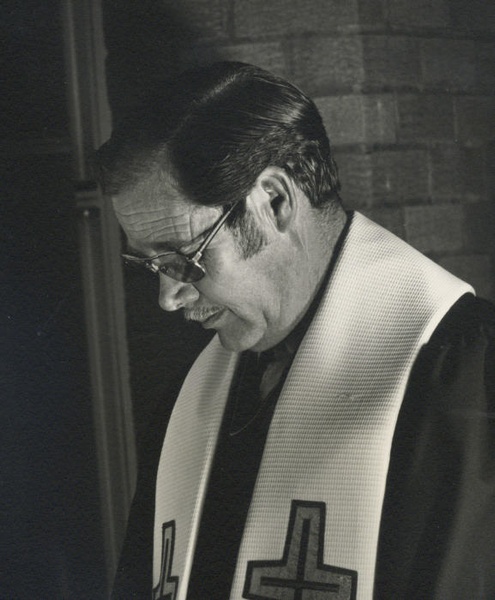 During Jarrell’s growing up years the family lived in many places in the Texas Panhandle, East Texas, and California during WWII, and back to Texas. He said he went to 13 different schools and one of them for four years – Amherst High School. While in high school, he was active in FFA, played a little football, participated in boxing, and met Nelloyd Harmon. They both graduated in 1951 and were married that fall on November 3rd.

Needing a job to support Nelloyd, Jarrell moved to Sweetwater and worked at Wayne Smith Motors. In 1952 Jarrell attended a city-wide youth revival and began to feel the tug toward preaching the Gospel. After counseling with his pastor and his father-in law David Harmon, the couple returned to Amherst and Jarrell began farming. That tug did not go away. He enrolled in McMurry College in 1953 and began his journey in the ministry.

He graduated from McMurry College and Perkins School of Theology at Southern Methodist University. He was ordained Deacon in 1960 and Elder in 1963. He served several churches in Texas and transferred to Yellowstone Conference in 1970 and was appointed to Powell, WY. He also served as Billings District Superintendent and UMC of the Tetons in Jackson, WY. He retired in 1995 and moved back to Powell. He loved to preach and teach about Jesus.

Some of his achievements were: the first in his family to graduate from college, was awarded 1962-63 Town and Country pastor of the year, attaining a private pilot’s license and then a commercial license, serving on the Powell Hospital Board, and being a District Superintendent. His hobbies were fishing, hunting, camping, flying, photography and cheering for the Dallas Cowboys.

Jarrell and Nell have two children: Lisa Nelloyd Tharp (Lee Kenworthy) of Cheney, WA and Stephen David Tharp (Ronada Gilman) of Billings, MT. They have two grandchildren: Brittney Tharp and Samantha Tharp of Victor, ID. They also have two bonus grandchildren Ashlee Brown of Boise, ID and Brian Nelson of Hillsboro, OR. Other family members are nephew Tony Tharp of Leander, TX and niece Kay Tharp Kropp of Sweetwater, TX, sister and-brother-in-law Joy and Harvey Patterson of Amherst, TX and brother-in-law Ron Coffee of Rome, GA He was preceded in death by his parents Steve and Emmy Tharp and brother, Clay Tharp.

Memorial services will be at First United Methodist Church, Powell on

Memorial gifts may be given to the Foundation, First UMC, PO Box 778, Powell or the charity of your choice.

To send flowers to the family in memory of Jarrell Tharp, please visit our flower store.