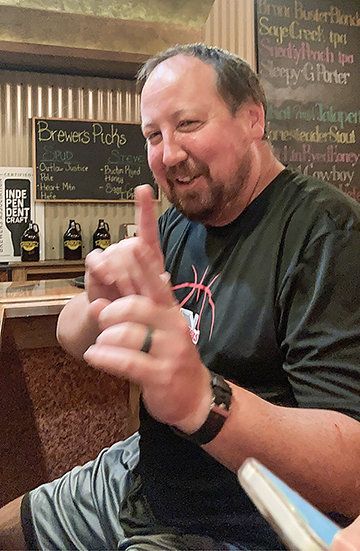 Jay Collins will be honored at a celebration of life service, which will be held on Saturday, Aug. 6, 2022, at 10 a.m., at the Yellowstone Building, 331 West Seventh Street, on the Northwest College campus.

Jay was born on Christmas Eve 1980, in Farmington, New Mexico, to Jerry and Jalene Collins. He spent his youth and attended school in Farmington, where he also developed his love for basketball.

Jay attended Junior College in Arizona at Cochise College and continued his education at Southern Utah University — both on basketball scholarships — and graduated with a degree in history in 2003. He was named All-State in high school and All-American in college along with setting records. After college he played pro basketball with the Idaho Stampede.

Jay’s coaching career, that took place over 17 seasons, included coaching at his alma mater high school and all levels of college, including Division I. He fulfilled his dream of being a head coach at a college when he was named the Northwest College basketball coach in 2019.

Sheila Rae Mabulac came into Jay’s life in 2011, and he married his best friend on April 28, 2018. They both loved dogs and shared their lives with at least one dog throughout their married life. Jay could never pass by a dog without petting it. He continually offered to dog sit for friends and co-workers, having as many as five in their home at one time.

Jay loved his wife, coaching basketball and his dogs, and at times, not necessarily in that order. He made the most of each and every day, bringing joy to his family members, those he coached and to his friends and co-workers.

Jay is survived by his wife, Sheila; his parents, Jerry and Jalene Collins of Farmington, New Mexico; his brother Gabe (Debbie); and his niece, Abbey Collins and his dogs, Vida and Guinness.

He was preceded in death by his grandparents, Bert and Skip Wayt and Curtis and Gladys Collins.

A basketball scholarship memorial fund has been established at Northwest College, nwcollegefoundation.org/jay-collins

To send flowers to the family in memory of Jay Edmon Collins, please visit our flower store.
Send a Sympathy Card