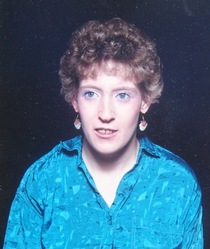 Jeanine Leslie (Cannon) Burnett died April 17, 2017 at the Davis Hospice Center in Cheyenne, Wyoming following an acute illness.  She was 53 years of age.  Jeanine was born March 25, 1964 in Mesa, Arizona to Delbert and Rose (Eaton) Cannon.  She grew up and attended school in Powell and completed training in cosmetology school.

Jeanine faced difficult struggles with her health for many years.  She was very proud of her son, Michael, and he and his family meant the world to her.  Jeanine had a special wit and a giggle that everyone who knew her will always remember.

Jeanine was preceded in death by her mother, Rose Cannon, grandparents, Bill and Mae Eaton, and Elbert and Madge Cannon.

A graveside service is set for Tuesday, April 25th at 10:00 a.m. at the Crown Hill Cemetery.
To send flowers to the family in memory of Jeanine Leslie Burnett, please visit our flower store.
Send a Sympathy Card