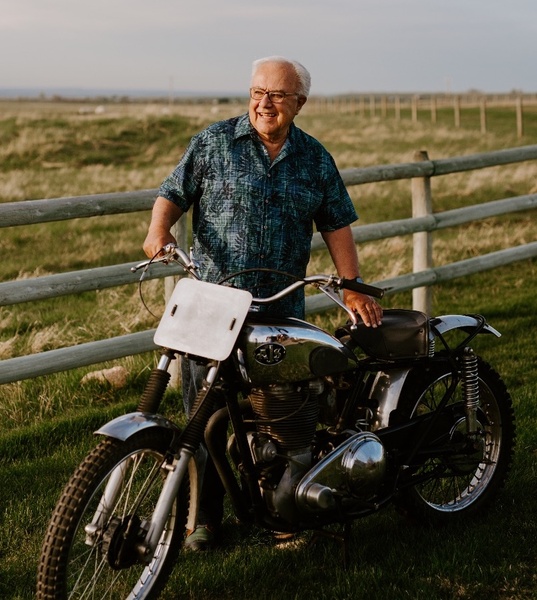 Jeff Fremont McCoy went to be with His Lord and Savior Saturday, May 22, 2021, at the age of 79. Jeff was born in Powell, Wyoming on March 27, 1942 to Edwin (Eddie) Fremont McCoy and Mildred (Bette) Wiley McCoy.
Jeff graduated from Powell High School in 1960 and married his high school sweetheart, Christine (Tina) Haney, one week later, on June 3, 1960. The couple moved to Longview, Texas where Jeff attended LeTourneau College, graduating in 1965 with a Bachelor of Science degree in industrial engineering. After graduating, they returned to Powell, where they raised their family and have remained a part of the community for 55 years.
Jeff was passionate about whatever he decided to do. He loved business and had a real entrepreneurial spirit. In keeping with his love of motorcycles and racing, Jeff started K&M Motorcycle out of his garage while working at Superior Machine. In 1974 Jeff launched his own fabrication/machine shop, Production Machine Company. There was no job too big or too small and he loved the challenge. Through the years Jeff also pursued other business interests including Mountain West Health Club, and a partnership in Heart Mountain Farm Supply.
Jeff put his trust in Jesus Christ as savior when he was ten years old. As a teenager, the tug of the world pulled him away from his relationship with God. He prayed and asked God to give him a wife that loved the Lord so they would serve Him together. God answered his prayer. From that moment on he set himself to love the Lord with all his heart. His love of God inspired in him a love for people which, coupled with his quick wit, gained him many life-long friends. The desire of his heart, always, was for them to know the love of his Jesus. Jeff never missed an opportunity to share Jesus, one-on-one, with people, from friends and strangers who stopped by the house, to an artist from New York that he helped with an art installation in exchange for letting him talk to him about Jesus. Jeff had a genuine interest in young people, and many were impacted by his passion for the Lord. He walked alongside them in their struggles and never gave up on them. He was a loving husband, father, brother, and friend who will be greatly missed.

To send flowers to the family in memory of Jeff McCoy, please visit our flower store.
Send a Sympathy Card