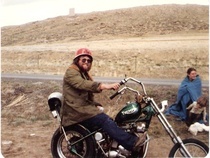 Jerry has left the building.

Jerry Dean Summers, aka, "Griz", born 12/25/55 has left this planet Earth for a new adventure.
He passed 11/17/16 of congestive heart failure/respiratory distress.  Son, brother, father, and grandfather, friend to so many, his absence is unreal. No more political debates, no more jokes and quips. He was gregarious, had lifelong friends, from high school through his work history, he gathered people around him. He had a great love of critters, hunting, camping, fishing - or drowning worms as he said-loved music and read more books than our library holds. His wit was so quick, with self deprecating snarky humor, and tremendous compassion for others. He had a very distinctive sense of humor. He was well liked and respected.
He was born in Ca, ended up in Cody as a youth, went all through school and graduated class of 1974 where he enjoyed being a thespian, playing lead roles in musicals and singing choir.  He joined the Army after graduation, was a tank driver in Germany on border patrol, where he received recognition 1st Battalion 7th Cavalry, and decorated for sharpshooting. He spent time in the oil fields and associated businesses, and many years of car salesman, schmoozing with everyone, which he loved. His very favorite job was running the trout farm, and lately, driving the senior bus in Powell, where he got to be around little ol ladies, whom he loved. He belonged to the Elks.  He taught his son everything a young person needs to know to live in Wyoming, how to hunt and fish, a love of sports and outdoors, and how to be respectful. He is survived by his son, Matthew, grandsons Carson and Peyson, brother Jim (Julia) nephew JD, nieces Saige and Skye, sister Shelley (John) nephew Clint, great nephew Henry, niece Savanna, and sister Sandra (Delmar) nephews Roger, Robert and Rodney.  He was preceded in death by his father Robert and mother Nora.
There will be a celebration of his life at the American Legion on Dec 3rd, 1pm with full military Honor Guard and 21 gun salute at the Powell Cemetery. His ashes will be co-mingled with those of his beloved animals and scattered in a favorite mountainous area.
He was a good man and good friend and will be sorely missed.
To send flowers to the family in memory of Jerry Dean Summers, please visit our flower store.