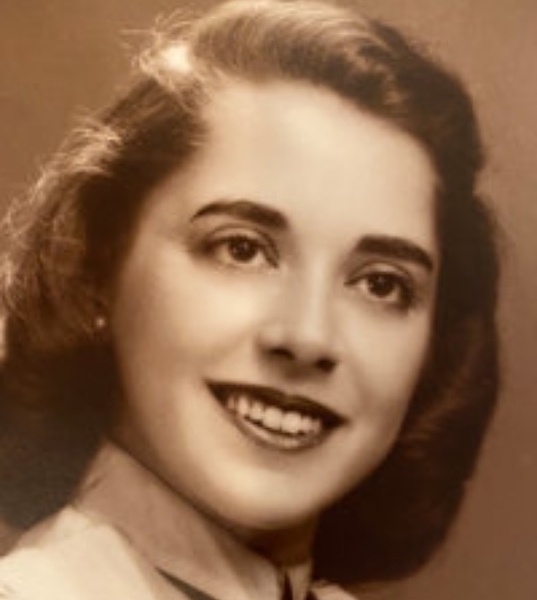 Joan Carmella Cross, of Powell, was welcomed into the loving arms of our Lord and Creator on Tuesday, Oct. 5, 2021.

Joan was born March 19, 1929, in Brooklyn, New York, to Thomas DiCicco and Kathryn DiCicco (Will). She grew up alongside her older, beloved brothers, Thomas and Carlo DiCicco. She graduated high school in 1947 and became a legal secretary. She met her future husband, Nelson Thomas Cross, at Rockaway Beach, Queens, New York, in a much storied event involving a waywardly thrown football and chocolate cookies. They dated four years before marrying on March 30, 1952.
In the early to mid 1950s, they welcomed their three sons, Lee Thomas, Paul Russell and James Nelson into the world. Unfortunately, James would pass due to complications resulting from a birth defect less than 30 days after his birth. Due to Nelson being an Air Force airman and non-commissioned officer, their life featured frequent moves throughout the United States, separations due to Nelson’s isolated tours in Germany, Korea and Vietnam and two four-year tours in Japan and Spain.
They possessed a true sense of adventure. This was illustrated by their frequent sightseeing road trips and embracing the different cultures they encountered. Joan became skilled in Japanese flower arranging, doll making and martial arts. She supported Nelson’s pursuit of various Armed Forces Judo Championships, USA Judo Olympic Trials and promotion to fifth degree black belt.
While in Spain, they became lifelong friends with Vince and Jean Grech, Harry and Darlene Herd and their respective families. They visited various Spanish historical sights, Portugal, France, Germany, Austria and Italy. They also led fundraising efforts for their sons’ high school sport activities.
Early on, when they were stationed in Cheyenne, Wyoming, where Paul and James were born, their love for the American West began. They pursued that enduring love, when they settled in Colorado Springs, Colorado, after Nelson retired from a 27-year career in the Air Force. Joan’s mother, Kathryn, and Nelson’s parents, Russell and Sally, relocated from New York City and lived with them until they passed.
While in Colorado Springs, Joan worked as an administrative assistant for El Paso County’s Civil Defense. Eventually, Joan’s health issues forced them and Kathryn to move to lower altitude in Rapid City, South Dakota, where they lived in a beautiful ranch style home on 2.7 acres with timber, lawn, homegrown flowers, fruit trees and abundant wildlife. Family and friends visited frequently where they enjoyed Joan and Nelson’s hospitality, Joan’s good cooking, laughter, games and storytelling.
Joan and Nelson’s next door neighbors, Paul and Teri Georgas, and their family became close and enduring friends. She lovingly stayed in touch with all through timely letters, cards and phone calls. She often held Bible studies with her Rapid City neighbors and church family. If anyone knew Joan, they knew how much she loved the Lord! She was an amazing example of godly love; she was patient, kind, thoughtful, generous, selfless and giving.
Joan was preceded in death by her husband Nelson; her son James; her mother and father, Kathryn and Thomas DiCicco; her mother and father-in-law, Sally and Russell Cross; her brother Thomas DiCicco Jr. and his wife, Trude; and Lee’s wife Michele (Ferra) Cross. Her son, Paul joined her in our Lord’s embrace within days of her passing.
She is survived by her brother, Carlo DiCicco (Martha); Carlo’s son Dan (Sheree) and their family; Thomas Jr.’s (Trude’s) daughters Nancy Peters and Susan DiCicco and their families; her oldest son Lee (Janis) Cross; his and Michele’s three daughters, Sarah Cross, Rachel Cross and Lauren Cross and family; her daughter in-law Linda Cross; Paul’s and Linda’s three daughters, Jesseca Cross, Michele Johnson (Joel), and Paula Cross; and her four great-grandchildren, Dominik, Averee, Nyah and Knox Johnson.
The family of Joan Cross would like to express much gratitude to Powell’s Heartland Assisted Living staff, who so lovingly cared for Joan. We are very appreciative of their generosity, compassion and kindness.
Joan’s celebration of life will be held in May 2022, in Laramie, Wyoming, (details to follow). Her ashes will be spread on Vedauwoo Pass with her husband, Nelson and son, James.
Donations may be made in Joan’s name to Saint Jude’s Children’s Hospital.
Her Lord said unto her, “Well done my good and faithful servant.” Matthew 25:23

To send flowers to the family in memory of Joan Carmella Cross, please visit our flower store.
Send a Sympathy Card