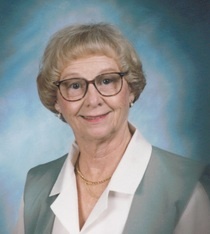 Joan A. McClain died Friday, Sept. 26, 2014, at Powell Valley Care Center. She was 84.
Joan was born July 12, 1930, in Eagle Grove, Iowa, to Theodore W. Meline and Edna Marie Arenkiel. She attended Fairview Hospital Nurses Training and was a RN. She married Claude Warren "Mac" McClain on Feb. 26, 1955, in Yellowstone National Park. They lived in several national parks across the United States, and also in Homestead, Fla., Naples, Fla., Penrose, Colo., and Powell.
Joan was a nurse and homemaker and was active in church music including singing in choir, playing handbells and directing children's choirs. She was a member of the United Methodist Church.
She was preceded in death by her parents.
She is survived by her husband Claude of Powell; son Mark Warren (Susi) McClain, Miami, Fla.; daughter Jan McClain (Edwin) Sapp of Powell; brother Theodore "Teddy" (Carolyn) Meline, Sheridan; sister Charlotte Frary of Monroe Mich.; seven grandchildren and 12 great-grandchildren.
A remembrance reception will be held at Glad Tidings Assembly of God Church, 777 E. 7th St. in Powell Tuesday, Sept. 30, at 7 p.m. Burial will be in Manzanola, Colo.
Thompson Funeral Home is in charge of arrangements and condolences may be sent to the family at www.thompsonfuneral.net or P.O. Box 807, Powell, WY 82435.
To send flowers to the family in memory of Joan A McClain, please visit our flower store.
Send a Sympathy Card