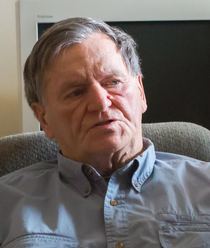 John Hall of Lovell, Wyoming passed away peacefully on April 13, 2016 at the New Horizons Care Center.  He was 82.

John was born in Guernsey, Wyoming on April 5, 1934 to Jess and Ida Hall.  He graduated from Guernsey High School in 1952.  He excelled in sports, wrestling, and football.  He was the star quarterback during his senior year, but he contracted polio that year during a severe outbreak, and he struggled with the effects of the disease throughout his life.

He was an avid fisherman and enjoyed tying his own flies.  He and his wife, Bunny, especially enjoyed fishing in Alaska.  He was a ham radio operator, and was known and loved throughout the world.  His call letters were W7CA.  He attended many ham radio fests all over the west.

John worked at the Bureau of Reclamation while studying at Montana State University.  He received his bachelor's degree and master's degree in science and counseling.

He married Bunny Jackson in 1962 at The Church of the Transfiguration in Jackson, Wyoming.  John and Bunny lived in Casper, Wyoming where he taught science and was a counselor at East Junior High School.  Bunny taught home economics at Natrona County High School.  After retirement, they moved to Lovell, Wyoming.

John is survived by his brother-in-law, Bob Jackson, and his family; and his good friends, Pat and Jerry Wellman of Lovell.

He was preceded in death by his parents; his wife; and their two beloved dogs, Lint and Rosie.

Cremation has taken place, and there are no services planned at this time.

Thompson Funeral Home in Powell was in charge of arrangements.
To send flowers to the family in memory of John F Hall, please visit our flower store.