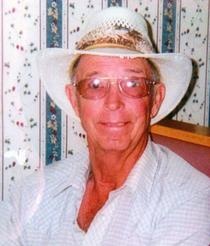 Johnny Norris passed across peacefully Sunday evening, December 15, 2013.  Born John Robert Norris, eldest son of Robert Eugene and Helen Florence (Smith) Norris, on January 16, 1939, in a small homestead cabin on what is now Lane 11 south of Powell in Park County, he lived most of his life farming, ranching, and later camping, fishing in the countryside, mountains, lakes, and rivers he loved.
John graduated from Powell Senior High in 1957 and immediately joined the Wyoming National Guard Unit.  He also went to work in the oil patch in Pinedale.  Always a homebody, he returned to Powell shortly after and married Peggy Ann Shipman on September 15, 1957.  He went to work for Dickâ€™s Well Service and then got on with Kellerâ€™s Trucking, thus achieving his first life goal: to be a truck driver.  After a short time living and working for a trucking company in Worland, he returned with his small family to Powell and went to work for L.L. Smith Trucking.  Johnny worked for Smith Trucking until an unfortunate accident, which broke both of his legs on Christmas Eve, 1964, after which he was laid up for two years. After recovering from the accident Johnny moved his family to the Mudgett place on Lane 11, right up the road from his great grandparents, George and Elizabeth Norrisâ€™s homestead and his parents, Bob and Helen Norrisâ€™s homestead. John and Peggy acquired the Mudgett farm in 1967 and began farming and raising livestock.  They farmed for the next twenty years; however, Johnny enjoyed the livestock trade more than farming. In 1980, John and Peggy bought the Powell Auction Market, which they operated until its closure in 1985.   John was always the first to admit that he just wasnâ€™t a â€œbusinessman.â€ He finished his work career retiring from the Shoshone Irrigation District where he worked for around sixteen years.
Born of a true Wyoming pioneer spirit, John was a consummate jack-of- all-trades and liked to keep busy with yard work, gardening, and vehicle maintenance.  His kids and grandkids knew he could fix anything.  Always a gracious host, he loved to visit over coffee and cookies or make a waffle breakfast for visitors. A repository of local history, he was a storyteller who loved to laugh. Old pictures prompted memories and he could entertain with a story about that tractor or that horse. He looked forward to the holidays and spending time with kids, grandkids, and great grandkids, all of whom eagerly anticipated his yearly gift of homemade fudge and special cookies made from a recipe handed down from his grandmother to his mother.  John also accompanied his mother Helen to church every Sunday morning until her passing.  He drove beet harvest for Don and Ethel Jean Eden every year, right up to September of this year when he decided the work might be too hard on him.
Preceded in death by his father Bob Norris (1986), his mother Helen Norris (1997), his brother Harley Wayne Norris (1999), and his infant daughter Sandra Dee Norris (1963), Johnny is survived by his sister Mary Helen (Norris) McCullough (Powell), brothers Riley James Norris (Powell) and George Patrick Norris (Sheridan), former spouse Peggy Ann (Shipman) Norris (Powell), daughters Shelly Jean Norris (Eldon, Missouri), Jonny Sue Norris (Powell), Patricia Jo (Addison) Chouinard (Powell), and son Jason Robert Norris (Basin). Papa John will also be missed terribly by his grandchildren who all rode with him or drove his tractor lawn mower:  Sherry Ann Howell (Byron), Adam John Bullinger (Laramie), Caleb Matthew Bullinger (Sheridan), Jordan Daniel Bullinger (Torrington), Brent Taylor Carrington (Tulsa, Oklahoma), Jen Michael Holder (Powell), Jacob Wayne Mennell (Powell), Erin Leigh (Mennell) Olsen (Cody), Kylie Rose Mennell (Powell), Ian Vannasdale (Basin), and great granddaughters Destiny Nichole Bullinger (Laramie), Karlee Carrington (Tulsa, Oklahoma), and a great grandson Levi Bugher (Powell). Uncle Johnny is remembered fondly by dozens of nieces, nephews, stepchildren and grandchildren, cousins, and friends.  Known to everyone as â€œa really good guy who would do anything for friends and family,â€ and dearly beloved, his Christmas fudge and cookies and mischievous grin will be missed by many for years to come.

Funeral services are scheduled for 2:00 PM Friday, December 20, 2013 at The Presbyterian Church on 329 North Bent Street in Powell. A reception will follow at the church.

To send flowers to the family in memory of Johnny Robert Norris, please visit our flower store.