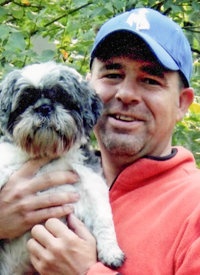 Joey spent his childhood and went to school in Montrose, Iowa. From a young age he had a passion for sports. He played little league baseball and high school football for the Central Lee Hawks. From the age of 7, he was an avid Dallas Cowboys fan. He even wore a Dallas ‘star’ tattoo for each of their Super Bowl wins.

Joey graduated from Central Lee High School in 1992. Afterward, he enjoyed storm chasing, which took him to Florida, Louisiana, Texas and Colorado where he made numerous friends. He was very fond of wildlife and anything outdoors, especially camping in the mountains of Wyoming and Montana. He also loved cooking and grilling for his friends and family, and he never turned down a game of pool.

In 2008, Joey moved to Wyoming where he focused on a career in sales. With his outgoing, friendly nature and his love for people, he not only excelled but made it look easy. It was said he could sell a ketchup popsicle to a woman wearing white gloves.

After his passing, some comments from friends and family include: “He was a fun guy and kept us on our toes,” “No matter the circumstances, I always knew you had my back,” “ Joe was a wonderful friend,” “Joe, you NEVER JUDGED ANYONE. Love you,” “So many great memories,” “Heaven is a happier place with Joe Yoe there,” “RIP Joe, you always made me laugh,” “Joe was always a good guy and friend,” “He will truly be missed by many,” “He always had a smile on his face and knew how to make you laugh and his wittiness was incredible. I personally am glad I knew him,” and “We lost a beautiful person too soon.”

Joey was known and will always be remembered for his contagious laughter and for his smile that could light up any room.

He is survived by his mother, Mary McCamant of Montrose; his 15-year-old son, Gavin Hasper of Donnelson, Iowa; his brother, Johnny Yoe of Cedar Rapids; his sister, Melissa “Missy” Ehermantraut (Mike) of Powell; his nephews, Christopher “CJ” Cooper and Matthew Cooper, both of Powell; and several aunts, uncles, and cousins.

Thompson Funeral Home handled the cremation, which has taken place, and a memorial service is planned for later in the summer. “See you in 2 &2.”

To send flowers to the family in memory of Joseph Arthur Yoe, please visit our flower store.