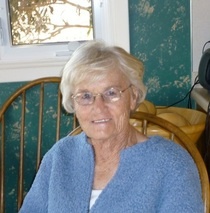 Josephine Clara Miller, 84, of Powell,  peacefully passed away on Tuesday, September 2, surrounded by her family at the West Park Hospital in Cody, after a 4-1/2 year battle with leukemia.

Jo was born October 15, 1929, in Ackley, Iowa, the daughter of John R. and Ina Cobie Lindaman.  She grew up on the family farm, the third of five daughters.  After excelling in her studies and playing the trumpet, she graduated high school in 1947.  She attended teaching preparation classes for the summer and began teaching in a one-room school house at Grundy County School Township at the age of 17.  After a year, she continued her education at Iowa State Teacher's College in Cedar Falls, Iowa, where she earned her teacher's associate degree in 1949.  Jo then taught elementary school at Rudd, Iowa and Northwood, Iowa until the spring of 1953 when she and a friend flipped a coin to determine whether they went east to Maine or West to Wyoming.  Jo won the toss and they ended up in Powell where she taught 2nd grade at Parkside Elementary until getting married to a young handsome homesteader, Don Miller, in March, 1954.  They welcomed daughter Kathy in 1958, and were partners in their farming operation until their retirement in 2005.  They celebrated their 60th wedding anniversary on March 1, 2014 with their entire family.  Don and Jo have been active participants in the Powell community and the Union Presbyterian Church for over 60 years.  They enjoyed years of traveling, playing bridge, skiing, gardening, and enjoying the outdoors.  Jo used her gifts of endless energy,  creativity, compassion, caring, and commitment for countless projects including teaching Sunday School, playing in the church bell choir, actively participating in the Presbyterian Women's Circle, and acting as secretary/treasurer for the church memorial committee.  She was a great friend to many, and her love and passion for her faith and her family were the center of her life.

Jo's memorial service will be held at the Union Presbyterian Church in Powell on Monday, September 8, at 11:00 a.m.  A private family internment at Crown Hill Cemetery will be held after the service/reception at the church.  Memorials in Jo's honor can be sent to the Union Presbyterian Church, P.O. Box 906, Powell, Wyoming, 82435; or the Leukemia and Lymphoma Society @ www.lls.org.  Arrangements are being handled by Thompson Funeral Home.

To send flowers to the family in memory of Josephine Clara Miller, please visit our flower store.