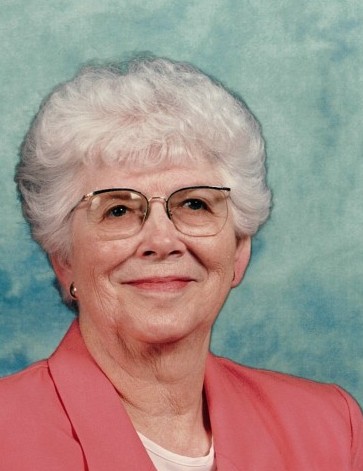 Joyce Dougherty was born on Christmas Eve, 1925, in Elmo, North Dakota, to parents Alfred and Myra Swingdoff. She died peacefully in Powell, Wyoming, on Sept 5th after a brief illness. She was 93 years old. Joyce grew up on the North Dakota prairie where her folks farmed, along with a sister (Glee) and brother (Keith). Joyce lost her sister to leukemia at an early age, as well as her dad to a farming accident in her early twenties.

After high school, Joyce attended Concordia College in Moorhead, Minnesota, graduating with a B.A. with honors in 1947. Joyce was an adventurous and independent woman for her time, spending a summer in Alaska and leaving the safety of home to pursue a career across the country. Her teaching career took her to Minnesota, Montana, California, and eventually to Lovell, Wyoming, where she served as the school librarian.

There she met her future husband Ed, and they were married in Lovell in 1956. Their son, Bruce, was born while the couple lived in Lovell. Shortly after, they moved to Minnesota, where Ed finished college at St. Cloud State University. During their time in Minnesota, three more children were born: Craig, Dave, and Annie. The family then moved to Rock River, Wyoming, before settling in Powell, Wyoming, in 1962.

While the kids were young, Joyce worked as a stay-at-home mom, while also substituting in the Powell schools. In 1974, Joyce went to work full time as the Assistant Librarian at Northwest College. In 1980, Joyce’s adventurous spirit led the couple to the Alaskan Bush to teach in small, remote native villages. Their eight year career teaching in Eskimo villages yielded great friendships that lasted for decades.

Retirement brought the couple back to Powell, and they also spent several winters in Arizona. Ed passed away from cancer in 2008 after 52 years of marriage. With the support of family and close friends, Joyce lived in her own home up until the age of 92 when she moved into the Heartland, which she loved!

Joyce was a proud charter member of Hope Lutheran Church, where she served in several capacities. Her faith and her Hope Lutheran family were very important and special to her.

She was preceded in death by her husband Ed, her parents, her sister Glee, and brother Keith. She is survived by her sons, Bruce (Vicki) of Powell, Craig (Judy) of Sheridan, Wyoming, Dave (Deb) of Shepherd, Montana, and her daughter, Annie (Kelly) Brandt of Powell. Joyce left  nine grandchildren: Beth (Josh) Ristow, Patrick (Mackenzie) Dougherty, Caitlin Dougherty, Gretchen Dougherty, Mackenzie Dougherty, Hayden Dougherty, Bailey Dougherty, Spencer Dougherty, and Ryan (Kaley) Brandt, along with one great-grandchild, Hannah Ristow. Joyce is also survived by her sisters-in-law Mary Dougherty and Marian Swingdoff, along with many nieces and nephews.

Joyce was very proud of her children, grandchildren, numerous friends, and friends of her children, following their activities and lives as they grew up. She loved eating popcorn and listening to PHS games on KPOW radio.

Joyce was a voracious reader and a genuinely loving individual. She will be remembered by many for her keen wit, strong intellect, beautiful smile, infectious laugh, and her unique ability to make everyone around her feel special.

Memorials may be made to the Hope Lutheran Church, Loaves & Fishes, Powell Senior Center, or a charity of the donor’s choice. Services will be held Saturday, September 14 at 11:00 a.m. at Hope Lutheran Church, with a reception to follow. Interment of ashes will take place at the Powell Cemetery. Arrangements are made by Thompson’s Funeral Home.

To send flowers to the family in memory of Joyce Alpha Dougherty, please visit our flower store.
Send a Sympathy Card