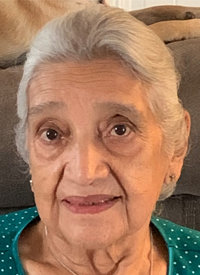 She was born on June 12, 1931, in Fort Worth, Texas, to Jose Cobos and Magdalena Hernandez. She graduated from Lovell High School.

She lived in Denver, Colorado, with their daughter, Gilda, and moved to Powell four years ago.

She was a member of St. Barbara’s Catholic Church. She enjoyed crocheting, reading, using her iPad, gardening and spending time with her daughters.

She was preceded in death by her parents, three brothers, two sisters, and a grandson.

She is survived by her daughters, Juanita Abas and Gilda Florez; brothers, Martin (Jackie) Cobos of Basin, Wyoming, and Rudy (Toni) Cobos of San Marcos, California; sisters, Socorro (Gene) Ramirez, of Tacoma, Washington, and Marcelina Hernandez of Powell; and several nieces and nephews.

To send flowers to the family in memory of Juanita C Gonzales, please visit our flower store.
Send a Sympathy Card