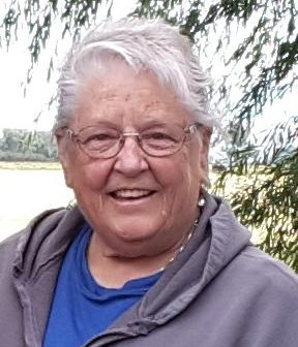 Judy passed away in Billings Montana 13 January 2020.  She is the first child of of Bill Adams and Win (Avery) Adams.  Judy grew up in Lovell Wyoming with her sisters Linda (Adams) Miller, Kris (Adams) Lucus and brother John Adams.

Judy spent many years working at the B & W Squeeze In restaurant owned by her parents, on the corner of Main and Idaho street in Lovell.  Win and Judy would go to the sugar factory every shift and take food orders, then deliver the food.  Growing up Judy had the best seat for the many Rose Parades during Lovell’s day and she participated in some of the parades with her family and her own kids.  Judy attended LHS and would have graduated in 1965.  Instead she met and married Dean Netherton 1962 in Lovell Wyoming.  To this union was born two children, son Jerry and daughter Denise.  They later divorced.  She met Jay Clark.  Jay & Judy married 1966 In Powell Wyoming.  Jay legally adopted Jerry and Denise. Judy got her CDL licenses to drive truck in case Jay went over the road, she could go with him.  Judy drove beet truck many years for local farmers.  Judy then worked in the scale house for different beet dumps. She loved talking to all the drivers passing thru.  She covered mail routes in rural Powell filling in as a sub driver.  She worked seasonal jobs and got her GED and graduated with her son together from NWCC in Powell.

Judy enjoyed helping all her friends and family, chauffeuring kids to Yellowstone to meet Grandpa and Grandma for summer visits to St. Anthony Idaho.  She also made sure her sister Kris and her son Jerry that was born on the same day celebrated their birthdays together (The Twins) as they were called.  Judy loved to sew and make outfits for all the kids and grand kids.  She was a stamper, making homemade cards for every occasion.  Everyone young or old received a hand made card form Judy.  Later in life as the grand kids came Grandma Judy did a lot of baby sitting for people around Powell. She would take all the kids to clogging, swim practice, soccer, baseball and video taped all the Christmas programs.  Judy was very much into family history, keeping all the records for the Adams and Clark’s.  She attended the Clark and Avery reunions.  She will be missed at the next one.  She loved to travel and visit with relatives where ever she went.

To send flowers to the family in memory of Judy M Clark, please visit our flower store.