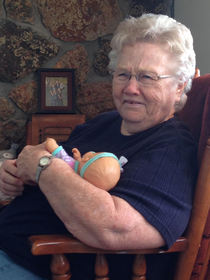 Karen Lucille Lynn Wardell
Karen was born March 18, 1935 in Lovell Wyoming and passed away on May 12, 2017 at the age of 82.  Karen was the daughter of Henry Lynn and Velma Lucille Eikenberry. While growing up, Karen and her family lived on a farm at Mantua, Warren, Mont. She spent time with family on the Pryor Mountains, and lived in Worland as well as Oregon, North Dakota and Nebraska before finally settling down in Lovell.  Karen finished her schooling in Lovell and graduated in 1953. As a teenager Karen saw a handsome young man that she told herself she would marry.  Karen worked at the bank in Lovell and did in fact marry that handsome Merlin J. Wardell on October 19, 1954, in the Idaho Falls LDS Temple. Karen and Merlin spent considerable time moving around from job site to job site as Merlinâ€™s work often took him out of town. As the children came and were begining school the family home was established just south of Otto where the family would spend the next 50 years. Merlin and Karen were blessed with six children.  Karen was first and foremost a housewife, caring for and nurturing her children and tending to much of the 20-acre farm they lived on while Merlin continued to spend considerable time away during the week with his work. Karen took on jobs throughout the years as a cook, route bus driver where she got to mother the children on her route including the kindergarten bus. Karen worked on the first county emergency numbering plan and traveled the county pounding posts and addressing homes throughout Big Horn County. Merlin and Karen were instrumental in the beautification of the Otto cemetery by planting the grass and trees and taking care of the cemetery for many years. Karen was active in the Church of Jesus Christ of Latter Day Saints. She faithfully served in many capacities. By nature, Karen was a nurturer and was always on the lookout for someone who was shouldering a burden and she knew a visit and a good meal were good medicine. After Merlin passed away in 2009 Karen decided to sell her place in Otto and move to Burlington where her family built her a new home. Karen was kind hearted and compassionate but even with those traits she wasnâ€™t afraid to straighten you out if in error. Karen was preceded in death by her Parents Henry and Velma Lynn; her younger brother Richard Henry who died when he was just three; and her husband Merlin. Karen is survived by her children, Monty and Dede Wardell of Lovell; Marla and Jim Isbell of Cody; Tyler and Donna Wardell of Burlington; Brady and Holly Wardell of Burlington;, Jackie and Lee Payne of Molt, Mont.; and Richard and Ruth Wardell of Burlington.  Karen and Merlin have 33 grandchildren and 22 great grandchildren.  A family burial in the Otto cemetery took place on Saturday, May 13, 2017. A memorial service will be held for Karen on Saturday May 27, 2017, at 10:00 a.m., in Burlington at the LDS church. Memorials can be made to the South Big Horn County Senior Center or the General missionary fund of the Church of Jesus Christ of Latter Day Saints.

To send flowers to the family in memory of Karen Lucille Wardell, please visit our flower store.
Send a Sympathy Card