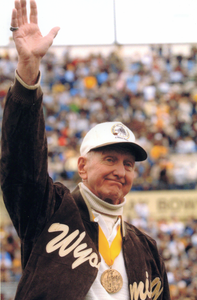 Keith graduated from Powell High School in 1945, having earned 12 letters and all-state honors in football, basketball and track. After a stint in the U.S. Naval Reserve, he attended the University of Wyoming on a basketball scholarship. He lettered in basketball all four years of his college career (1947-50), playing for legendary coach Ev Shelton.

In 1950, he was selected basketball team captain and the team most valuable player. He earned varsity letters in football, basketball and baseball at the University of Wyoming and is known as the last three sport letterman graduate of the university.

Keith spent 40 years as a teacher, coach and athletic administrator in Wyoming; two years at Evanston High School and 38 years at Powell High School. He earned his masterâ€™s degree in physical education and athletic administration from Indiana University in 1958. During his tenure at Powell High School, he established many of the policies and traditions that are currently in place. Keith enjoyed an outstanding coaching career, having won state, regional and conference championships in football, basketball, track and tennis and was honored as â€œCoach of the Yearâ€ several times. He started the PHS tennis program in 1974 and continued to coach the tennis team until his retirement in 1992.

Two $2,000 Keith Bloom Leadership Awards are given each year to two graduating seniors. The award was established by a former PHS student â€œto recognize one who has been a tremendous example to countless students from the Powell High School system for many years.â€

Keith served as state president for the following professional organizations: Wyoming Association of Health, Physical Education and Recreation, the Wyoming Coachesâ€™ Association and the Wyoming Interscholastic Athletic Administratorsâ€™ Association. As president of the Western Wyoming Athletic Conference for three different terms, he was instrumental in developing rules and regulations for the newly formed conference.

Keith devoted his life to the young people of Powell and Wyoming. He was a Little League coach, Boy Scout adviser, member of the Park County Congressional Awards Committee, volunteer state track meet official, Guardian for Jobâ€™s Daughters and was a DeMolay adviser for 10 years. In 1954, he received the Legion of Honor Award, DeMolayâ€™s highest honor.

The first president of the Powell Recreation District Board, Keith was instrumental in developing many of its policies and guidelines during those five, three-year terms from 1974 until 1988. Keith was the recipient of the Wyoming Recreation Commissionâ€™s State Achievement Award in 1986.

The Powell Valley Chamber of Commerce honored Keith for his community service by selecting him as Chamber Member of the Year in 1979.

He was a 50-year plus member of Absarokee Lodge No. 30 A.F. and A.M. in Powell and served as president of the Powell Rotary Club in 1986.

Keith held memberships in the Cowboy Joe Club, Northwest Trapper Booster Club and the Powell Athletic Roundtable in support of these programs.

On Nov. 16, 2000, Keith was one of four selected statewide to receive the â€œ2000 Golden Bell Awardâ€ in recognition of significant contributions to the advancement of education on the local, regional and state levels.

Keith was a past elder of the Powell Presbyterian Church.

He retired as activities/athletic director of the Powell schools in 1992.

In 2006, Keith was honored by the University of Wyoming by being selected as a Distinguished Alumnus. On Feb. 20, 2009, Keith was inducted into the Powell High School Hall of Fameâ€™s Inaugural Class and had his basketball jersey retired.

In 2010, Keith was inducted into the first class Hall of Fame of the Wyoming Association of Health, Physical Education, Recreation and Dance. He received the Powell Schools Foundationâ€™s Distinguished Alumnus award in 2012.

He was preceded in death by his parents Carl and Minnie Bloom and wife Joyce Bloom.

Keith is survived by his son Jon (Cindy) Bloom; daughter JoyAnn (Gregg) Bessler; grandchildren Brennae Bloom, Skyler Bloom and Cassidy Maines; great-granddaughter Braelynn Hurndon; sister Phyllis Yager; and nieces, nephews, the many friends he made over the years and the countless athletes he had the privilege of coaching.

Funeral services will be held at 2 p.m. Saturday, Sept. 28, at Union Presbyterian Church in Powell. Visitation will take place from noon to 1:45 p.m. Saturday at Thompson Funeral Home.

Memorial donations can be sent to the Powell Schools Foundation, Cowboy Joe Club or the Union Presbyterian Church.

Thompson Funeral Home is in charge of arrangements.

To send flowers to the family in memory of Keith Bloom, please visit our flower store.