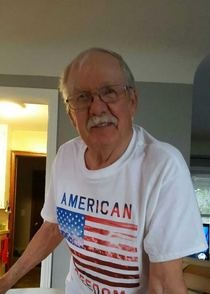 Keith Wayne Disinger of Clark died Aug. 19, 2016, in Billings. He was 75.
Keith was born June 1, 1941, in Frankfort, Indiana, to Alonzo Keith and Mildred Ann (Woodruff) Disinger.
He graduated in 1960 from Rossville High School in Rossville, Indiana.
Keith served in the U.S. Army from 1961-64.
He worked as a process technician for Eli Lilly in Indiana until his retirement.
Keith was an avid hunter, fisherman and outdoorsman.
On Nov. 10, 2006, he married Dolores M. Gyuran in Clark, and the couple made their home there.
Keith attended Bennett Creek Church in Clark.
He was preceded in death by his parents and son Glenn Disinger.
Keith is survived by his wife, Dolores M. Disinger; sons Norman (Rebecca) Disinger, Kevin (Stacey) Disinger, Daniel Gilbo and Richard Gilbo; daughters Diane Chlipala, Cindy Lockwood and Yvonne (Michael) Walker; brothers Byron (Christie) Disinger and Jim (Linda) Gyuran; and sister Sue (Doug) Smith. He also is survived by 14 grandchildren and 13 great-grandchildren.
Funeral services will begin at 10 a.m. Wednesday, Aug. 24, at the Bennett Creek Church, 11 Road 8 WC in Clark, with Pastor Kurt McNabb officiating. A viewing will take place one hour before the service.
Burial will be at the Bennett Butte Cemetery in Clark.
Funeral services are planned for Wednesday, August 24, 2016, at the Bennet Creek Baptist Church in Clark.  There will be a viewing at the church the same day, for one our before the service.
Thompson Funeral Home is in charge of arrangements. Condolences can be sent to the family at www.thompsonfuneral.net or to P.O. Box 807, Powell, WY, 82435.
To send flowers to the family in memory of Keith Wayne Disinger, please visit our flower store.