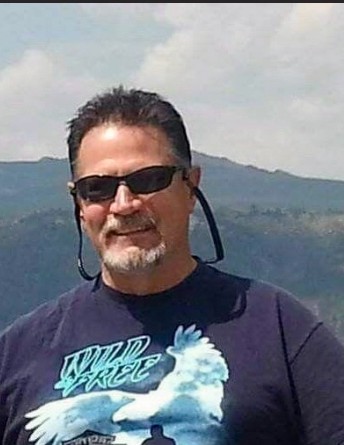 On April 10, 2020, this world lost a very kind hearted and fun loving man and heaven gained a new choir member to join in singing praises to his Lord and savior Jesus Christ.  Kevin Eugene entered this world November 24, 1956 as the last of 5 children born to Wayne and June (Fenton) McGary.  What a wonderful Thanksgiving weekend blessing. He attended Powell schools, graduating from Powell High school in 1976. He married Michelle Powell,  and worked various construction jobs in the Powell area before joining the Sheridan County Sheriff’s Department in 1979. While in Sheridan, he attended Sheridan College, majoring in Criminal Justice.  In 1983 Kevin and Michelle and their 3 girls moved back over the mountain to Powell, where he joined the Park County Sheriff’s office . Michelle and Kevin divorced shortly after.   Kevin was the happiest when he was helping other people.  This is evidenced  in his membership in Park Co. Search and Rescue and his joining the Powell  Fire Department in 1983. He married Julie Morris and to them was born another girl and 2 boys. Kevin served as a fireman until 1993 and left the Sheriff’s department in 1994 and he and Julie moved to Minnesota in 1995, where he started his own trucking business, eventually moving back to Wyoming in 2009. Kevin loved his Wyoming mountains and the hunting and fishing they offered, listening to music, riding his Harley, family gatherings and cooking up new (and usually spicy) foods. Kevin could always liven up a room with his quick wit and love of laughter.  We will always love and forever miss you.  He is survived by his brother Gary , sisters Judy Loyning (Doug) and Vicki Tollman (Ray) of Powell. Daughters , Taya McGary (Daniel Bell) , and Tasha McGary of Sheridan and Tonya Rhinehart (Michael) of Surprise, AZ,  Kaylene McGary ,and sons Shea and Kaycee all of Cottage Grove, MN.  Kevin was also blessed with 12 grandchildren and 2 great grandchildren.  He was preceded in death by his parents and his brother Vernon. Cremation has taken place and a celebration of life will follow at a later date.  Anyone wishing to send cards to the family can mail to P.O. Box 807, Powell, WY 82435 or online to thompsonfuneralpowell@gmail.com. Memorials can be sent  to Cedar Mountain Center, 707 Sheridan Ave.  Cody, WY 82435 in Kevin’s name or to the memorial of their choice.

To send flowers to the family in memory of Kevin Eugene McGary, please visit our flower store.
Send a Sympathy Card