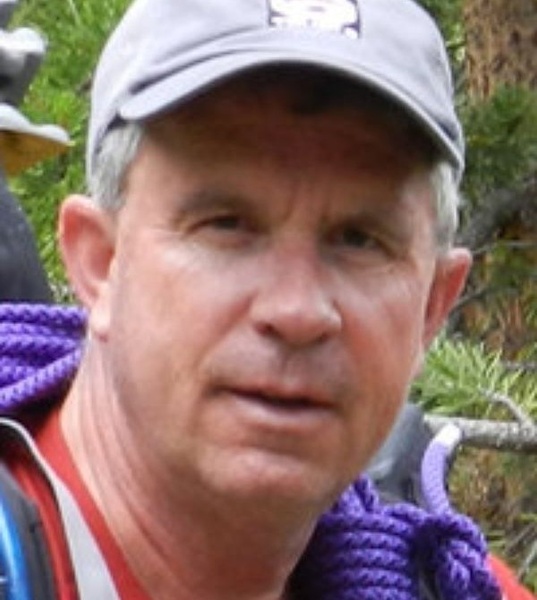 Kirt Dee Cozzens was born March 25, 1962, in Provo, Utah. He was the oldest son born to R. Dee Cozzens, Jr., and Julaine Johnson Cozzens. The family soon moved to Billings, Montana, where they would welcome Kirt’s brothers — Chris, Todd and Tyler — into the family. From Billings, the family moved to Lovell, where these four little boys would soon become big brothers to their little sister, Tiffany. The family lived in the Lovell, Cody and Powell area for several years.

Kirt received his education from Cody High School and graduated in 1980. During his high school years and upon graduating, Kirt enjoyed many hiking and climbing adventures. He spent a lot of time with his best friend, Monte, traveling to conquer mountains and ice. He led his brothers on many hiking and climbing adventures as well, helping to mold them and shape them into the men that they would become. Kirt especially liked bouldering below the dam in Cody, ice climbing throughout the Shoshone National Forest, skiing, racing a snowmobile on the backstreets of Cody after a nice snowstorm (with brothers attached!) and hiking throughout the Teton wilderness. Kirt loved his siblings, as he would always include them in his personal activities. Kirt remained close to Monte throughout his life, keeping their friendship special.
After high school, Kirt moved to New York City to work for his uncle and aunt, Greg and Alisa Cozzens, in the diamond industry. Kirt attended the University of Wyoming for a year and then served a two-year mission for the Church of Jesus Christ of Latter-day Saints, in Guatemala. Upon his return from Guatemala, Kirt opened an outdoor sporting goods store, Alpine Style, in Cody, and ran it for a time. It was during this time that he married Tami Ryan and welcomed his first daughter, Brianna Jean, into the world. Kirt and Tami later divorced, and Kirt closed Alpine Style. After closing the store, Kirt went to work for Garvin/Yellowstone Motors in Powell.
When Kirt was 33, he met the love of his life and the person he would spend the remainder of his days with. Her name was Janet, and she soon became his best friend. Janet had a little girl, Chelsea Lee, from a previous marriage, and Kirt fell in love with that little girl, too. Janet and Chelsea were a package deal and Kirt never batted an eye at the opportunity to take them into his heart. Three years after Kirt married Janet, they welcomed their son, Brinson Dee Cozzens, into their lives. Brinson was born on March 9, 2001. It was 22 months later, Dec. 6, 2002, when Kirt and Janet welcomed his fourth and final child, Cache Moran, into the world. Later, Kirt became Papa to three darling boys: Zaidyn, Zeakyn and Zaxtyn. This completed Kirt’s family, and he couldn’t be prouder.
Kirt continued to work for Garvin/Yellowstone Motors throughout his life where he would clock an impressive 29 years. Kirt became a Toyota aficionado. He was the top Toyota salesman in the northwest region — Wyoming, Montana and Colorado — and held that title until his death. He was well known in the community as an excellent employee and customer focused salesperson, setting the pace for sales within the Garvin/Yellowstone team and forming lifelong friendships with many of his customers.
Janet and Kirt had a special bond. They hiked and traveled mountains together and raised their family, side by side. The family enjoyed many adventures in the Teton, Absaroka, Shoshone and Bighorn mountains, the places they all loved so much. Janet took Kirt, for better or worse, in sickness and in health, and stood by him through the few short months of his illness, never leaving his side. Their love lives on in their children and grandchildren.
Kirt is survived by his wife, Janet Kathleen; his daughters, Brianna Jean and Chelsea Lee; his sons, Brinson Dee and Cache Moran; his grandsons, Zaidyn, Zeakyn and Zaxtyn; his mother Julaine Johnson Jensen (Max Brown); his siblings, Christian J., (Jan), Todd Goulding (Missy), Tyler Ralph (George), and Tiffany Coughenour; his stepmother Joann Cozzens; and numerous nieces, nephews, aunts, uncles and cousins who he loved dearly.
Kirt was preceded in death by his grandparents, Ralph Dee Cozzens, Sr., Vernice Moncur Cozzens, Goulding Johnson, and Carma Bringhurst Johnson. His father, Ralph Dee Cozzens, Jr. was also waiting for Kirt on the other side.
Services are Saturday, Jan. 8, at 10 a.m., at the Lovell Community Center.

To send flowers to the family in memory of Kirt Dee Cozzens, please visit our flower store.