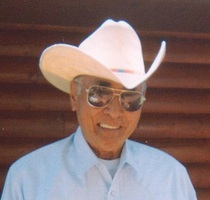 Koe R. Ando, of Powell, died March 6, 2016, with family surrounding him. He was 94.
Koe was born Feb. 25, 1922, to Muragi and Miyono Ando at Silesia, Montana. He moved to Powell at the age of 12 and graduated from Powell High School in 1939.
In 1940, Koe began farming, and on June 23, 1947, he married Ritz Saimo. They raised five children and enjoyed farming together until he retired at the age of 70. Koe loved to hunt, fish and spend time with his family at their cabin, and those memories will always be cherished by his family.
While discussing his life, Koe stated he enjoyed farming and working with Ritz and all the children raising decent crops together. He followed his children and grandchildren through their school years of playing sports and school activities. It was one of his greatest pleasures. Hunting, fishing and playing cards with his family were unforgettable experiences for him.
Koe was preceded in death by his parents, Muragi and Miyono Ando, brothers Charles, Jack, John, Shiro, sister, Miyako Miyagishima and a nephew Curt Ando
He is survived by Ritz, his wife of 68 years; five children, Joyce (Larry) Wright, Debbie (Nick) Dole, Corky (Diana) Ando, Donna (Tom) Reed, and Greg (Susan) Ando; grandchildren Kerrie, Bob (Amy), Ken (Tami), Michelle, Jay (Rebecca), Nathan, Kayla, Trent (Crystal), Darcie (Brian), Jacob, Ruby (Dion) and Joe; great-grandchildren Bryce, Kendall, Cale, Koe, Kayo, Eloise and Lex; Sam Miyagishima, as well as many other nephews and nieces; and his life-long friend, Tak Ogawa.
Services will be held at 10:30 a.m. Saturday, March 12, at New Life Church, 185 S Tower Blvd, Powell. Cremation has taken place and burial will be held privately at a later date.
Memorial contributions may be sent to Spirit Mountain Hospice, 707 Sheridan Ave., Cody, WY 82414.
Thompson Funeral Home is in charge of arrangements and condolences may be sent to the family at www.thompsonfuneral.net or P.O. Box 807, Powell, WY 82435.
To send flowers to the family in memory of Koe Ando, please visit our flower store.
Send a Sympathy Card