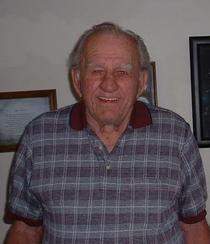 After a long life of 88 years, Leon Moore passed away from natural causes, Thursday, May 1, at his home in Spokane, Washington.  Leon was born to Marvin and Cora Moore June 20, 1925 to in Era, Texas.
Like many of the brave young men of his generation, Leon chose to serve his country during World War II by joining the US Navy and serving as an Electricianâ€™s Mate on the aircraft carrier, Nehenta Bay, from 1943 until his honorable discharge in March of 1946.  Leon then moved to Powell, Wyoming where he met Velma Gillett whom he married in Casper, Wyoming, December, 18, 1948.
Leon worked in the oil industry as a seismograph technician and drilling-mud engineer until he retired in 1982.  His greatest passion in life was music.  He was a self-taught stand-up bass and harmonica player, and well-known for his beautiful singing voice.  These talents were complimented by his dynamic personality and sense of humor. He also enjoyed seeing and restoring Model A automobiles.
He is survived by Velma, his wife of 65 years; his son Ed Moore, Missoula, Montana; his daughter and son-in-law Carol and Jan Willis of Spokane, Washington, who helped Velma provide loving care for him as his health failed; Grandson Sean Satake, Missoula, Montana; Granddaughters Ashley Crawford and Summer Hadfield, Bellingham, Washington; three great grandsons James and Nathan Hadfield , Bellingham, Washington, Jack Satake, Missoula, Montana; and sister Beth Ford of Kansas City, Missouri.
Services will be held for Leon in Powell, Wyoming, Saturday May 10 at Thompson Funeral Home 111 West Third.  He will be interred at Crown Hill Cemetery in Powell, Wyoming with full Military Honors.  The family requests that donations be made to Hospice in Spokane, Washington.
To send flowers to the family in memory of Leon Albert Moore, please visit our flower store.