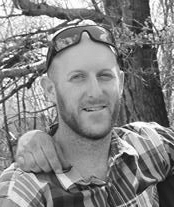 Logan Glenn McCullough, 34, of Powell, passed away unexpectedly Tuesday, November 6. He left so many traces of his talents behind... woodwork and other items he crafted, concrete landscape curbing laid around the basin, roofs shingled, walls built and mudded, surfaces tiled and that’s not all. He was a natural auto mechanic and leaves many family members and friends looking for a new fix-it guy. His huge heart helped many others and he made friends wherever he went. Logan was preceded in death by his daughter, Lily; grandmother, Sheila Pease; grandfather, Jan Harrison; and great grandparents, Don & Loye Stanley and Ray & Thelma Harrison. Logan left a huge void in the hearts of his friends and family and is survived by his parents, Matt & Kim Lawson and Doug McCullough; sisters, Brynn McCullough and Kelsey Lawson; brother Cory Lawson; grandparents Meldon McCullough, Mary McCullough, Janice Harrison and Bob & Ida Lawson; and girlfriend, Bridgette Hine. Dozens and dozens of aunts, uncles, cousins, nieces and nephews in his family and extended family dearly miss him too. A celebration of Logan’s life will be held at a later date and cremation has taken place. Thompson Funeral Home is in charge of arrangements.

To send flowers to the family in memory of Logan Glenn McCullough, please visit our flower store.
Send a Sympathy Card