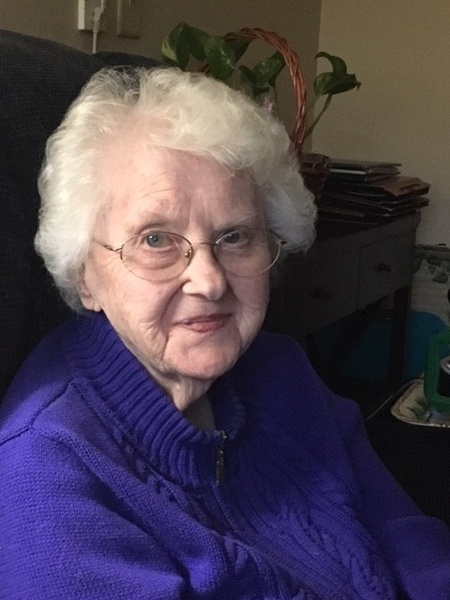 Lorraine Joyce Alme was born April 8, 1925 in Staples, MInnesota to Hazel (Mellum) and Archie Alme. She died on October 19, 2018 after a stroke.

Lorraine grew up and attended school in Ulen and Staples, the eldest of 4 children, including 2 younger sisters who predeceased her. She met Alfred Williams at a summer dance in Staples when she was 15. They married January 31, 1944 and enjoyed 66 years of dancing together. They moved many times during Al’s career with Gambles Hardware. Their last move was to Powell, WY in 1969, when they bought their own store, and she worked alongside Al making the business a success.

Al and Lorraine enjoyed traveling and her favorite trips were to Paris, Rome, Hawaii, cruising the Caribbean, and anywhere she was visiting family. For many of their retirement years they enjoyed wintering in Arizona, where they had a circle of retired friends from their Gambles years.

Lorraine was a wonderful wife, Mom, Grandma (“Meme”), and “Grandma-Great.” She was an avid reader, excellent bridge player and knitter, expert crossword puzzle solver and from-scratch cinnamon roll and lemon meringue pie baker. Her fabulous homemade fudge, divinity, and lefse will be sorely missed at Christmas. She enjoyed singing, had a beautiful soprano voice and often sang for events in her early life.

Lorraine loved her own home and friends in Powell. After she moved to Billings in February 2017 she missed them, especially the staff at “Seniors” and the “bridge ladies” who were so kind as her health began failing. Thank you all.

Al’s 2010 death left Lorraine bereft and she never stopped grieving for him. We will miss her terribly but take comfort in imagining she and Al dancing again to Lawrence Welk in heaven, as they did in the living room when we were kids.

Lorraine is survived by her daughter, Judy Williams (Malcolm Goodrich) of Billings, grandchildren, Colin of Spokane, WA, and Ainsley of Seattle, WA; her son Dave Williams, granddaughter Tracy (Brandon) Gates, and great grandchildren, Kolby and Cabree, all of Powell; her brother Allyn Alme of Rochester, MN; and an extended family of cousins, nieces, and nephews.

The family thanks the many wonderful caregivers at St John’s Hansen and Powers Cottages and Senior Independence Hospice.

In lieu of flowers the family requests memorials to St John’s Lutheran Ministries, 3940 Rimrock Road, Billings, MT 59102, your local food bank, or the charity of your choice.

Cremation has taken place. A memorial service will be held in Powell on October 27, 2018 at 2:00 pm at Thompson Funeral Home with coffee following.

To send flowers to the family in memory of Lorraine Joyce Williams, please visit our flower store.