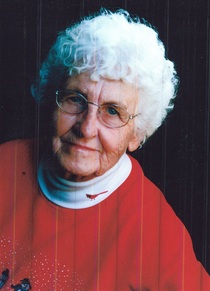 Mamie was born at home near Buehl, Idaho, January 26, 1916.  She was the second child of twelve born to Squire and Luella (Miller) Dillon.

In 1917 the family moved to a homestead just north-west of Deaver, Wyoming.  Mamie grew up there, and lived at the homestead until she married Victor Sigmon on March 2, 1936.  The young couple left Deaver in 1947 so that Victor could work in the oil fields around the country, returning to Deaver in 1956.

She worked for the Deaver-Frannie School District for 20 years, retiring in 1979 so that she could spend more time fishing and camping with her husband.

In 2006, Mamie moved to Joliet, Montana to liver near her son, Lyle and daughter-in-law Carol.

She was preceded in death by her parents; all of her brothers and sisters; her husband; her infant daughter, Ruth; and her daughter, Ila Godfrey.

Services will be held at the United Methodist Church in Deaver, Wyoming on Saturday, May 7, 2016 at 10:00 a.m.  Interment at Deaver Cemetery, next to her husband, of 60 years, will take place immediately following the services.
To send flowers to the family in memory of Mamie Bell Sigmon, please visit our flower store.
Send a Sympathy Card