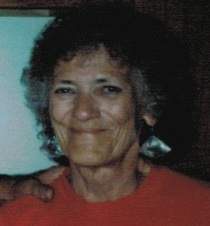 Margaret Ann (Trix) Bischoff
Memorial services will be held at 2:00 p.m. Thursday, October 30th 2014 at the Lovell Community Center.
Margaret, fondly known at Trix, was born July 15, 1934 in Lovell to Robert S. Halliwell and Elizabeth Mae Halliwell.  She was raised in Lovell where she met and married classmate Gene T. Bischoff on July 2, 1953.  After they were married, Trix and Gene spent their summers in Lovell working on the Bischoff family ranch.  When school started in the fall they would move to Laramie for the school year.  They kept the same schedule when they moved to Fort Collins until Gene finished Vet school in 1963.  At that time, they moved their family of four young children, with the 5th one on the way, to Powell where she lived until her passing on October 27, 2014.  Trix passed away in her home where she raised her 5 children and helped raise 10 grandchildren and 6 great grandchildren.  All of her childrenâ€™s and grandchildrenâ€™s friends knew they were always welcome in her home.
Survivors include her 5 children and their families: daughter Pam Kysar and husband Jim of Powell and their children Aimee (Spencer) Jolley and their children Kaya, Kynlee and Kysar of Dayton, WY and Kasi (Marc) Cantrell and their son Chance of Powell; son Lyle Bischoff of Powell; daughter Val Cross of Powell and her children Kori of Illinois and Justin of Powell; son Max Bischoff and wife Maryanne of Lovell and their children Chelsea (Lance) Martin and daughter Easton of Powell, Tyrell (Charis) Bischoff and their daughter Oakley of Lovell and Cade Bischoff of Lovell; daughter Deborah May and husband Lanning of Cowley and their children Maci, Miranda and Reece all of Cowley, and one sister Betty Lou Cantrell of California.
She will be deeply missed by her immediate family, extended family and special friends.

To send flowers to the family in memory of Margaret Bischoff, please visit our flower store.