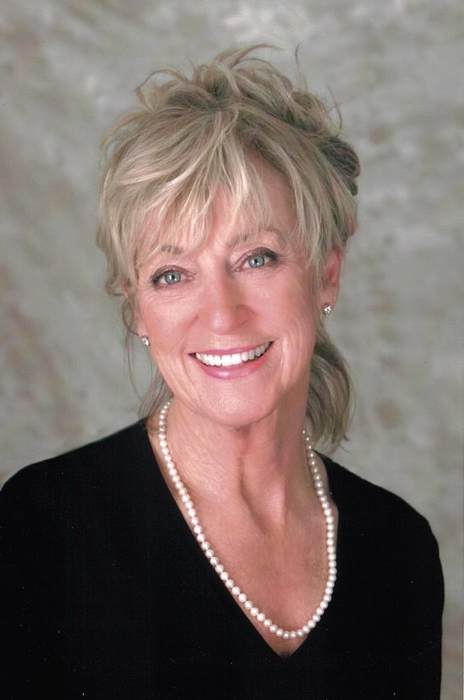 On her 62nd wedding anniversary, Marlene Patricia Gallagher died peacefully in her home surrounded by family and overlooking her flower garden, while listening to mourning doves.

Marlene was born in Dore, North Dakota, on March 24, 1938. Her family later moved to Missoula, Montana. She graduated from Missoula County High in 1956 where she was a majorette. On occasion, she would proudly bring out her original baton, reminding us of her unforgotten skills. She went on to work as a carhop at the Frontier Drive-In. It was here she was set up on a blind date with her future husband, Bob Gallagher. Although Marlene’s father was not quite certain of Bob’s suitability, he eventually won her heart and everyone else’s.

Throughout her lifetime, Marlene was often heard saying: “Isn’t Bob handsome? I think he is so cute and he looks darling in those little round glasses!” Marlene and Bob were married Aug. 17, 1957. At that time, she worked as a tele-communication specialist for Mountain Bell. She loved her position and it is there that she developed her love for visiting with others.

Their first daughter was born Sept. 14, 1961, in Missoula, Montana. They later moved to Powell, Wyoming, in 1964 where they became owners of Big Charlie’s Restaurant and Marlene gave birth to two more daughters. This is where Marlene’s life started taking shape and where lifelong friends and memories were made. The kids on Cary Street all remember Marlene. She was known to have races with any child who would challenge her; she hosted make believe beauty pageants set on the backyard swing set and carnivals that made the Powell fair look modest. However, even as a top-notch neighborhood mom, she never lost her sense of style. She appreciated everything from bell bottoms to sequin gowns.

Together, in 1973, Marlene and Bob built and opened Hansel and Gretel’s. Hansel’s was known throughout the Big Horn Basin for its homemade pizza and blue cheese dressing, its french fries and Marlene’s homemade soup and pies. Marlene worked day and night mixing over 100 pound batches of pizza dough in her industrial size mixer. Her delicious pies were crafted at home in the early morning of each day.

Marlene was an active volunteer and community leader. She was a: Rocky Mountain Manor board member for over 25 years; Hope Lutheran Church Council member; 2009 Lifetime Achievement Award recipient and member of the Powell Chamber of Commerce; Powell school board member; North Central Accreditation Association member and 4-H Club judge. Her favorite activities were hearing stories of her grandchildren, baking (especially for others), walking, celebrating her Birthday Club and dancing in the kitchen to her favorite music with her precious sisters and aunts. Of course, what her daughters cherish most is the time they all spent out on the shopping trail, which included lots of laughter and countless hours that required Bob’s patience — which he never lost!

Marlene was preceded in death by her parents, Orville and Clara Flynn, her brother Orland Flynn and sister Donna Webb.

Marlene’s life was beautifully orchestrated from birth until her last breath. Her words will remain in our hearts forever. A celebration of Marlene’s life will be held Saturday, Aug. 31, 2019, at 11 a.m. at Hope Lutheran Church in Powell. A reception will immediately follow at the Yellowstone Building at Northwest College, 331 E. Seventh St.

Our sincere love and appreciation to all of the staff/doctors at the Billings Clinic for caring for her so deeply. Also, a big thank you to the Stillwater Hospice of Northern Wyoming for making every transition, question and concern comfortable during this difficult time.

In lieu of flowers, memorial donations can be made in Marlene’s honor to Wish for Haiti or Stillwater Hospice.

To send flowers to the family in memory of Marlene Patricia Gallagher, please visit our flower store.
Send a Sympathy Card