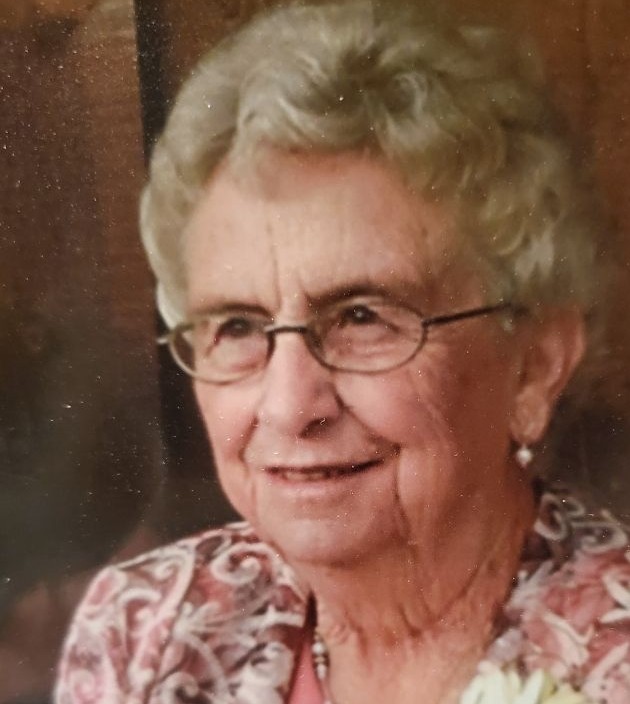 Tiny was born in Arnett, OK to Perry and Annie Lutz on July 5, 1927 taking her place among seven brothers and sisters. While attending her freshman year at Arnett High School she met her future husband, Elmer Collar. When he returned from World War II they were married in Coldwater, KS on May 7, 1946.
They welcomed their first daughter, little Judy, and oldest son, Bill, while living in Arnett. Shortly after Bill was born the small family made their way from Oklahoma to Heart Mountain where they drew a homestead. There they welcomed their second son, Randel, and youngest daughter, Marcia.
Tiny and Elmer were charter members of the First Southern Baptist Church where Tiny served on several committees, headed vacation bible school, taught Sunday school, and served as the Sunday school secretary. She was a member of the sewing club, loved Pinochle parties, and reading with her dog, Sammy, by her side.
Above all, Tiny loved being around her family. Nothing made her happier than being around her children, their spouses, and a mess of grandkids while they fished, camped, or just ran around the farm. She will be incredibly missed.
Tiny was preceded in death by her husband of 55 years, Elmer, her parents, her siblings; Wilbert Lutz, David Lutz, Opal Wilson, Beulah Miles, Emma Carter, Perry Jake Lutz, Robert Lutz, her granddaughter, Anna Collar, and son-in-law, Benjamin Wade Baggs.
She is survived by her daughter, Judy Baggs of Cody; son, Bill Collar and his wife, Karen, of Athena, OR; son, Randel Collar and his wife, Cathy, of Darrouzett, TX; daughter, Marcia Ray, and her husband, Mike, of Wapiti, ten grandchildren, and twelve great-grandchildren.

To view a live strream of the services please go to the First Southern Baptist church facebook page: https://www.facebook.com/FSBCPowell

To send flowers to the family in memory of Mary Ellen Collar, please visit our flower store.
Send a Sympathy Card