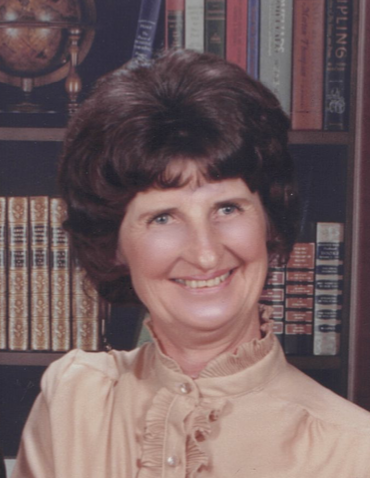 The Church of Jesus Christ of Latter-day Saints

Mary Ruth Ewart was born in Burlington, Big Horn, Wyoming, 12 February, 1930 to Edward Ewart and Ruby Mary Nicholson. That was believed to be her name until upon request for her birth certificate she found out differently. Her mother’s brother was asked to register the birth at the courthouse. He wanted her name to be Dora Mary and so he simply made that her name. Mary’s name was legally changed many years later after finding the error. Her father died when she was 6 years old and the family moved to Fenton which was about nine miles west of Burlington. They moved onto a sheep ranch where her older brother, Bus, was employed by Alfred Jefferson Blackstone. Later her mother and Mr. Blackstone were married and became the only father that Mary really knew. She recalls that he was a fine man and good to all the family members. He was simply called “Pop.” Mary went to a small country school called Fenton. There were eight grades, one teacher, and one schoolroom. When it came time for high school, Mary left home to attend Cody High School and graduated from there in 1948. Recalling how she met her husband, Clarence, she said we were sort of always there. Clarence worked for the Blackstone Ranch when Mary was just a kid. She said he had his own car, a 1935 Terraplane and taught Mary and her sister Grace to drive. They used to drive as much as money and gas would allow. She was just a nosy, young kid when the war broke out and Clarence was drafted. He would come home on furlough to the Blackstone Ranch. Upon graduation she went to work for the government on the Shoshone-Heart Mountain Reclamation Project. The government was reallocating the land that had been a relocation camp for Japanese during WW2. The land was available to service men and others by a land lottery system. When that project closed, work began on building the Boysen Dam. She worked in the Procurement Office, which let contracts to buy all the equipment and supplies for the power plant, moving the railroad by tunnel across the Wind River, etc. It was in 1950 that Clarence and Mary were married in Burlington. Their only child, Marie, came along there after. Mary spent twelve years working for the government. Part of that time was in Alaska working for the Air Force. Mary had heard her brother talk about Alaska, where he was located during the war, and always wanted to go there. She worked with the Air Force in the property management section, which was a watchdog for all the equipment and materials that built the “White Alice” system, a code word for the communications network that was built across the Coasts of Alaska serving as communications warning stations to detect a possible air attack from Russia. The family loved Alaska. They built a cabin at the head of Lake Susitna, about 100 miles northeast of Anchorage. The land was being homesteaded which allowed ownership upon building a structure on the property., You reached the cabin by crossing 26 miles of water and it would still be light because at that time of year in the summer Alaska never got dark. It would be twilight for a while and then light again. Mary loved sports and joined a bowling team, a basketball team and played on a softball team called White Alice. She excelled at all of them. Mary and her family returned to the states and lived in Oregon for a couple of years. It was there that her mother passed away. They then moved to Cody, Wyoming in 1964. Mary went to work for First State Bank and she and her husband opened their own business, Feyhl Brothers Auto. Mary became a member of The Church of Jesus Christ of Latter-day Saints in May of 1960 while living in Alaska with Clarence joining several years later. She held many positions in the Church but her love was family history, Her daughter, Marie, recalls going to the library in Casper with her and given a reel of film and instructed what, where and who to look for, often doing her homework there and falling to sleep until the library closed down. She served as Family History Director for nearly 40 years. Best years of her life she would be happy to report. Mary was a lover of America and a true patriot. She was known to get misty eyed as the National Anthem was played. Mary loved Wyoming and her home in Cody. She had a yard full of flowers of all kinds and always had a garden as long as she could. She and Clarence enjoyed being house sitters for other members while they served missions. She and Clarence served a mission themselves from December 1987 to December 1988. They loved it enough to go again from 1991 to 1992. They served family history missions. Clarence passed away in 2009. Mary continued to live in their home until June of 2021 when health made it necessary to move into the nursing home in Basin, Wyoming. It was there that she passed away on June 12. Mary is survived by her daughter, Marie (Aaron) Fraley and 5 grandchildren, Daron (Jennifer) Fraley, Terry (Stephanie) Coleman, Kyle (Ginnie) Coleman, Collie (Doug) Evert and Janae Dougherty. She was the proud great-grandmother of 19 and great, great grandmother of ten. She had several cousins, nieces and nephews. Mary was preceded in death by her parents, her husband, Clarence and her siblings, Harold (Bus) Ewart, Hugh (Babe) Ewart and Grace Spruell.

To send flowers to the family in memory of Mary Ruth Feyhl, please visit our flower store.
Send a Sympathy Card

The Church of Jesus Christ of Latter-day Saints