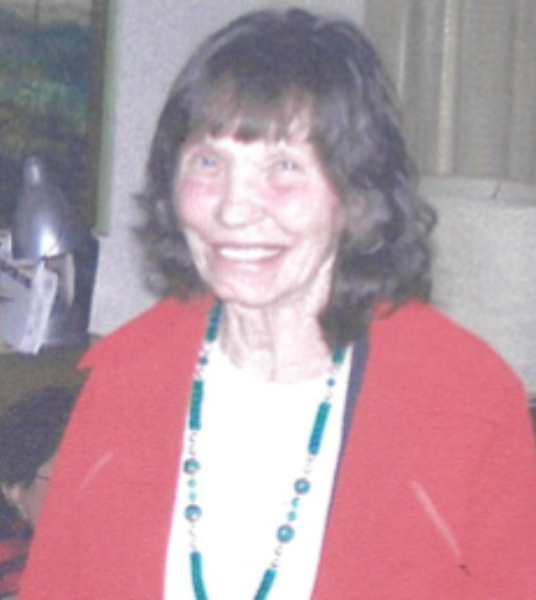 Mary passed peacefully in her sleep after years of suffering with crippling arthritis.

She was the oldest of five children born to Robert (Bob) and Helen (Smith)
Norris. She was born at home on the Powell flats south of town. She was the oldest
of five children and the only girl. A baby girl, Georgianna, was born before Mary
but passed in infancy. Two years after Mary, Johnny was born and they were constant companions in their young years. There were no close neighbors so they
spent a lot of time riding horses and exploring the land around them. Learning to
work at an early age Mary and Johnny helped in the house and on the farm. Mary
never minded hard work. Mary would say in her Memory book. “Mama and Mary
were busy from dawn to dark. There was water to heat on the coal stove dishes to
wash, and the cream separator, with a hundred parts to sterilize. The chimneys from
the gas and kerosene lamps must be kept shiny. There was bread to bake and
canning to do and in the winter, clothes to sew.”
When Mary started school she was terrified. The teacher and the kids scared her
and she didn't like the big yellow bus. She would come home that first day telling
Mama how scared she had been. “Moma told her it would be better the next day, as
the puppy pulled at her new red anklets, and Mary insisted, “No it won't!” Several
days later Mama had to push Mary out the door, and hold it shut! “Mary always
resists change to this day!” The only good thing about going to school was the
handsome tall man that drove her bus, Roy Barns who was known in the community
as the Rocky Mountain Cowboy. He sang western music on the radio. She would
write, “He was a great help to calm fears of leaving for the day.”
There would be three younger brothers and Mary was very helpful to her Mom
when they were young. Mary loved her brothers especially Harley who was
diagnosed with Down Syndrome.
On November 26, 1954 Mary married Meldon McCullough, a farmers son from
across the river. To that union three sons were born. Steven, Douglas and Curtis.
Meldon not wanting to farm put his interests in the oil field. Mary would say, “
They lived in 25 apartments in four years and traveled to Colorado, Nebraska,
Montana, and Wyoming.” When Steve was about 13 Mary's father sold a few acres
to them and they built a house on the same land where Mary was born. She was
finally able to get out of the 8' wide trailer and stay in one place. She loved her
home, having family just up the road and by now three sons. She raised chickens
and a big garden. Mary had a green thumb.
Meldon advanced in the oil field and the years rolled by. They boys were leaving
home and she needed something more in her life. In 1979 Meldon helped with a
down payment on a new duplex apartment. She rented out one side and lived in the
other. In 1985 she opened her own business, The Little People Place day care. Mary
was a natural care giver and loved kids. For 21 years she watched scores of children . Some of those kids grew up and would bring her their kids. The children loved her. There was always crafts and snacks. One day you would go over there and there might be only one or two kids and the next day there could be ten or more.

Mary was an artist with a very perceptive mind. Her favorite medium to work
with was water color and she got very good at it. She painted family and scenes
with great resemblance. Although there are many painting none were much larger
then a 5x7. She used them for post cards. In 2006 arthritis struck. She says she
remembered the day it started. After joint replacements and increasing pain she
closed the day care. It was a very sad time for her. She continued to paint. Each
year that passed left her more disabled and caused more pain. She missed the things
she used to do,”cleaning, cooking, gardening, sewing, painting, writing and looking
after children.”
Her greatest love was her sons and always her biggest worry and concern. She
would do whatever she could to help them any way she could. She worked hard to
leave them something. With time passing and her physical body failing she refused
to loose what she worked so hard for. She never lost her sense of humor and would
always laugh at Steve's jokes. With help from Meldon, Steve Penny and
granddaughter Brynn, she was able to stay home as long as possible. With special
thanks to Savina Butler, Alison Fields, and Wyo. Senior Health.
Mary was proceeded in death by her Grand Parents, her parents Bob and Helen
Norris, brothers Johnny and Harley. Grandson Logan and Great granddaughter Lilly
Renee. Sister-in-lay Judy Norris.
She leaves behind her life partner, Meldon, sons Steve (Penny) of Powell,
Douglas of Red Lodge Montana, and Curtis of Denver. Granddaughter Brynn
(Jarred) of Powell. Brothers, Riley of Powell, and George (Dawn) of Sheridan.
Grandchildren by marriage Trav (Janet) Ekwall of Torrington,
Wendy Phillips of Glenrock, and Dusty (Tracy) Romey of Laramie. Eight
grandchildren and 2 great grandchildren several nieces and nephews.
There will be no services at her request.

To send flowers to the family in memory of Mary Helen McCullough, please visit our flower store.
Send a Sympathy Card