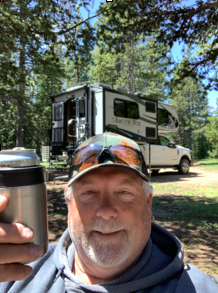 Michael married Deb Althoff in 1973. They had two children, Travis and Amanda. Michael and Deb divorced in 1987.

Michael married for the second time to Cindy Baxendale in 1995. Together they had his youngest daughter, Demi Dusenberry, born in 1998. Michael and Cindy divorced in 2016.

Michael was a hardworking man and worked in the oilfields his whole career, most recently for KLX Energy Services as the District Manager. His passions were fishing, golfing and camping, which he spent most of his free time doing. Recently, Michael began growing his hobby for firearms. He was an active member of the Powell Golf Club and the Walleye Unlimited group. His favorite areas were the Sunlight region in the Beartooth Mountains and the Yellowtail Reservoir near Lovell. He loved ice fishing with his daughter Amanda and friend Mike Kvia. He also loved occasional trips to Canada and Alaska for fishing. During the warmer months, Michael spent his time golfing with his buddies Mike Foulger, Jerry Herweyer, and many others. He took his daughter Demi camping every summer, visited Yellowstone often and rode four-wheelers around the mountains.

Michael was very proud of his children and their achievements. His oldest, Travis, currently serves in the Marine Corps. One of the highlights of Michael’s life was getting to participate in a ‘Tiger Cruise’ following Travis’s deployment to Afghanistan following the events of September 11th. He and Travis were able to spend a few days enjoying Hawaii and then a week of sailing back to San Diego on the USS Peleliu. Michael was present when Travis was awarded his Combat Aircrew Wings which meant a lot to them both.

Michael spent a lot of time with his daughter Amanda, as she lives in Powell. They attended weekly lunches together and became regulars at Pepe’s. They shared a love for fishing, camping and firearms.

He was also very proud of his youngest daughter, Demi and her artistic abilities. She currently attends the University of Wyoming for graphic design and will be graduating in the spring.

Services will be held Saturday, October 3rd, 10:00AM at the Powell Golf Course.

To send flowers to the family in memory of Michael R Dusenberry, please visit our flower store.