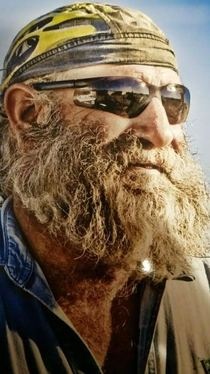 Mike Schwab of Las Vegas, Nevada passed away April 2nd as a result of a motorcycle accident. He was born May 21st, 1962 in Billings, Montana and attended schools in Powell and Cut Bank, Montana.

Mike married Tammy Fossen in 1981, and from this marriage they had two children, Michael and Jessica. In 1990 Mike married Michelle Murphy and Mike adopted Michelleâ€™s son Stephen as his own. Mike and Michelle raised their family in Powell before moving to Las Vegas in 2002.

Mike enjoyed riding his motorcycle, serving and reading bible scripture to homeless in Las Vegas, and providing a safe haven for teens on Friday nights. He also enjoyed cheering on the Denver Broncos, family reunions in Powell, and performing welding and fabrication projects on the side. Mikeâ€™s real pride and joy were his children and grandchildren.

Mike was preceded in death by his wife Michelle and mother Pat Sanford.

Funeral services will be held at Hope Lutheran Church in Powell at 10:00 am on Thursday, April 13th.

To send flowers to the family in memory of Michael Dale Schwab, please visit our flower store.
Send a Sympathy Card