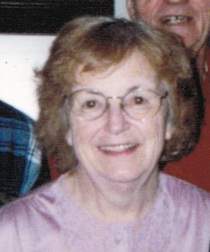 Nada Jo Ivy, 83 passed away on Sunday morning, March 16, 2014 at the Powell Valley Nursing Home after a prolonged fight with Alzheimer's. Nada and her husband, Grady, have been residents of Powell for over 50 years.
Born in Spur, Texas on August 6, 1930, Nada was the seventh of nine children of Albert and Esther Fry. She was a graduate of Spur High School and Draughon's Business College in Lubbock, Texas. After completing her education, Nada's first job was at Spur Security Bank. She was the first in her family to get a paying job outside of farming or ranching, and she -used her new found income to enhance the lives of her parents and siblings. While she was working at the bank in Spur, Grady Ivy walked into the bank one day and into her life forever. They married December 22, 1951. In 1959 they moved to Powell so that Grady could start work at the Elk Basin Gas Plant. Nada found a job with the First National Bank of Powell in 1959 as a secretary and retired in 1992 after reaching the position of Asst. Vice President.
Nada is survived by her husband Grady, three children: Mike, Bev and Becky and her brother, Mac Fry. She is also survived by eight grandchildren: Robert, Shaun and Jillian Moore; Aaron, Brian and Laura (Styles) Schnitker and Tracy and Chris Ivy; and two great-grandchildren: Alden and Hudson Moore.
A memorial service is planned for Friday at 10:00 am at the Union Presbyterian Church. A private burial will follow the funeral service at the Crown Hill Cemetery. A viewing and reception will be held on Thursday from 3 to 7 pm at Thompson Funeral Home for those wishing to give their condolences to the Ivy family.
To send flowers to the family in memory of Nada Jo Ivy, please visit our flower store.