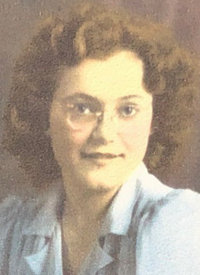 Naida was born Dec. 27, 1923, in Powell to Clif and Nell (Moses) Buchan and joined her older brother, Ross.

She attended Powell schools, graduating as salutatorian of her class, in 1941.

It was at Powell High School that she met her future husband, Darwin Franklin. They were married Dec. 28, 1941. To this union three children were born: Michal Ann (Dennis) Tyree, Clifton Newell Franklin, and Becki Lou (Jim) Rodriguez. She also had a beloved daughter-in-law, Jan Franklin, who recently passed away.

She and Darwin settled at their farm near Garland early in their marriage and spent their life farming. They celebrated their 70th wedding anniversary shortly before his death in 2012.

Naida was a great cook and loved gardening, sewing, crocheting and knitting. She was active in several community clubs, including Girl Scouts, and was a 4-H leader. Naida and Darwin later enjoyed traveling thousands of miles in their camper.

Naida was a member of the Union Presbyterian Church in Powell and active in the Jackson Circle. She also enjoyed being a member of EPASC and having fellowship with her close-knit neighbors in the Heritage Park Homes.

Naida was preceded in death by her parents, brother Ross, her daughter-in-law Jan, one grandson and one great-granddaughter.

A graveside service was held on Wednesday, Sept. 4.  Thompson Funeral Home was in charge of arrangements.

To send flowers to the family in memory of Naida B. Franklin, please visit our flower store.
Send a Sympathy Card