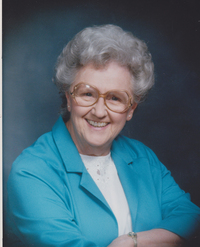 Family, sacrifice and patience are hallmarks of Nellemay Gillett Blevins, matriarch of the Blevins family and one of Union Presbyterian Churchâ€™s grand ladies.
Nellemay Gillett Blevins, 96, of Powell, died Thursday, July 18, 2013, at the Powell Valley Care Center.
Nellemay was born at home to the late Herbert and Retta Gillett, July 25, 1916, near Kingston, south of Hamilton, MO.  She traveled with her family to Edgar, MT, aboard an emigrant train in 1918; their personal belongings filling a box car.  Her father, mother and five older brothers, Lyle, Clarence, Elgin, Ralph and Louis loaded horse drawn wagons (even their automobile was pulled by a team of horses) and set off for Powell.  The family homesteaded in an area still referred to as the North End.
Because the homestead soil contained too much alkali for farming, the Gillett family relocated to Willwood in 1921 where the original farm house remains today.  Two more siblings were added to the family after the move, sister Katie and youngest brother, Lee.  Katie, Nellemayâ€™s only surviving sibling, resides in Boulder, CO.
An excellent student, Nellemay loved reading, learning and playing the piano.  Her mother supported Nellemayâ€™s love of music by raising and selling turkeys to purchase a piano and trading produce for lessons.  She performed the lead role in her Senior Class operetta. Nellemay graduated from Powell High School in 1934 although college was not possible because of the Great Depression.
Nellemay worked as a clerk at the federal relief office, as a cafÃ© waitress and at the employment office in Cody when romance prevailed and she married her high school sweetheart, Carlus Blevins, on December 7, 1934, in Billings, MT.
After living and working in Powell, Nellemay and Carlus moved their family to Estes Park, CO, in 1960, purchasing and operating a motel for three years.  During World War II, they lived in Lovell, WY.
Following their return to Powell, Nellemay began thinking about the cost of sending her children to college.  Always an independent woman, thinking out-loud, â€œIf I had an apparel store, nothing big you understand,â€ she could create her own business.   Her store, â€œNellemayâ€™s,â€ a women and childrenâ€™s clothing boutique, remained on Powellâ€™s main street for 32 years.
Nellemayâ€™s personality was the secret of her storeâ€™s success as she became one of Powellâ€™s most respected business owners.  Nellemay became a personal buyer for her customers, often saying, â€œI thought of customers as my friends.â€
She was deeply involved in her community.  Nellemay attended the Union Presbyterian Church and served on the Session, as a Deacon and choir member.  She earned her 3,000 hour pin volunteering for the Powell Hospital and Nursing Home Axillary and was a member of Eastern Star and Jobs Daughters.
Nellemay visited family in Hawaii and treasured the vacation she and Carlus took to the Aloha State following his retirement.  Nellemay retired from her business in 1995 and continued her volunteer work and visited family in Europe and Japan.
Nellemayâ€™s five children are Carlus P. Blevins, Jr. (Loretta) of Burlingame, CA, Linda I. Schaefer of Waddell, AZ, David H. Blevins, (Cindy) of Powell, Christy A. Blevins, The Kingdom of Bahrain and Red Lodge, MT and Jan Tisthammer (John) of Spokane, WA.  She is also survived by 11 grandchildren.
Nellemay was preceded in death by Carlus, who died in September, 1984.
A memorial service honoring Nellemay will be held at 10:00 a.m., Monday, July 29, at the Union Presbyterian Church in Powell.  Burial will be at Crown Hill Cemetery.
The family is requesting memorials be mailed to the Union Presbyterian Church, 329 N. Bent St., Powell, WY 82435.
To send flowers to the family in memory of Nellemay G Blevins, please visit our flower store.
Send a Sympathy Card