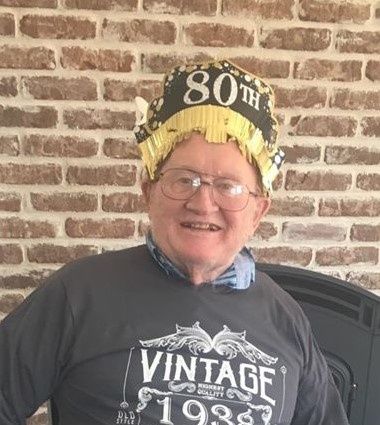 Olaf Ray Wood passed away on the morning of April 14, 2020, at the Parkview Care Center in Billings, MT, at the age of 81. He was born on August 4, 1938, in Sheridan, Wyoming to Roy and Blanch Wood, the 2nd of 3 children. He grew up milking cows on the dairy five miles south of Sheridan.  He was called “snoozy” when he was little because he would take naps any old time and anywhere he got tired. When he was a young boy, he took his sister's high strung horse and rode her without permission. It ended up running away with him and as it went to jump a fence, he flew off.  He broke his arm and hit his head, and he ended up losing his hearing in one ear. He was active in 4H where he raised a heifer and trained her to ride so he could ride her to bring the other cows in when it was milking time. He showed her at the fair and won a young brown swiss bull from the Gallatin Ranch.  The bull, named Rustler, was an ornery one, but Ray worked hard and got it trained. He won a heifer with Rustler the next spring. He was really good with horses and helped train race-horse thoroughbreds for Archie Nash. He was small and wiry and able to do a great job riding.

He joined the Church of Jesus Christ of Latter-Day Saints as a teen and was active for the rest of his life.  He met his sweetheart, Leora, at a Church dance in Billings, and knew that she was the girl for him. He graduated high school in 1961 and joined the Air Force, went to training and came back and married Leora Ann Schow, in Sheridan on Dec 15, 1962.  They were sealed in the Idaho Falls Temple a few days later. In the years that followed, being in the Air Force, he moved a lot with his family and had one or two children at each place. He served in Klamath Falls, OR, Novato, CA, Madrid, Spain, San Antonio, TX, Lubbock, TX, and Indian Springs, NV. They had 8 children.  He also served in the Viet Nam War after he was stationed in California. He retired from the Air Force after 20 years and settled in Powell, WY to finish raising his family. Ray was quite the practical thinking father and taught his children to change a tire and the oil before he would teach them to drive a car. He worked for Lockheed Aircraft in Saudi Arabia for three years but did not want to move his family there. He decided to go to college for welding in 1985-1986. He made many fun welded things, among which is a flatbed trailer that is still used by the family today. After that, he decided to start truck driving as a career.

Ray loved to travel.  He enjoyed his truck driving days and seeing the whole of the lower 48 United States and parts of Canada. Even though he was away a lot, he loved his family and always tried to make it home for the holidays and important events in his children's lives. Ray retired from truck driving in 2003, after a heart attack, and spent many nice times with his wife, and being active in his church. They enjoyed traveling together and visiting their grown children.  They had many family gatherings at the home, which Ray enjoyed. He was very devoted to his wife and

when Leora took ill in 2007, he took care of her so she could pass at home with family around her.

He was fun to be around and was quite a tease. His grandchildren will remember him reaching out and tickling them when they would run by him and dare him to catch them.  One of his favorite tongue-in-cheek sayings was “I'm so nice, it bothers me”, and Mom's comeback was “yes, it should!” He had a very catching laugh. Duchess was a beautiful palomino mare of Ray's that he gave to Cindy, his niece when he was ordered to go to the VietNam War, in case he didn't come back. He wanted his horse to go to someone that would care for her and use her. She treasured that horse.

He lived in Powell until 2014 when he had a stroke, and moved to Billings. He overcame that stroke and had many fun years living at Highgate Senior living and was a favorite among the caretakers there with his fun attitude and teasing ways. He enjoyed visiting with his children and grandchildren. He would often visit them in Wyoming, and fly out to see his children in Idaho and  California. For his 80th birthday, he flew out to Placerville, California for a big celebration with his children. On his last trip to California for Thanksgiving, he had a major stroke that he was unable to recover from. He traveled to Billings on December 13th in a rented RV through a snowstorm but arrived safely.  He has spent the last few months of his life at the Parkview Care Center in Billings.

To send flowers to the family in memory of Olaf Ray Wood, please visit our flower store.