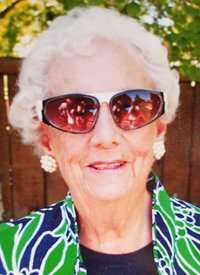 Patricia (Pat) Jean Guymon, 90, passed away surrounded by family at the Powell Valley Healthcare on May 29, 2019.

She was born Jan. 19, 1929, in Supply, Arkansas, to Dallas Houston and Geneva (Lewis) Caldwell. As a child she lived in Texas, Oklahoma, and Illinois, but she called Arkansas home.

She attended her senior year at Provo High School in Provo, Utah, and graduated from there in 1947. It was in Provo she met and married the love of her life, LaGrand Jackson Guymon, on June 29, 1948.

They moved to Douglas, Wyoming, in 1954. When LaGrand started his business as an electrical contractor and won a bid for the fine arts building at Northwest Community College in 1955, they moved to Powell and lived here for over 30 years.

While in Powell, Patricia attended Northwest Community College. During the summers of the 1960s, she worked during harvest as a beet truck driver. In 1970, she started work as a nurses’ aide at Powell Hospital and enjoyed working there for several years.

LaGrand’s work took them to Rawlins for a short time. They then moved to Cody, where Pat has resided for over 30 years.

Pat was privileged to work for the Hoffman family, owners of Hobo Oil, until just before her 90th birthday. Her family is very grateful to them for their generosity and kindness to her, as in her later years, going to work was one of the things she enjoyed most.

Pat was interested in history and politics and was active in the Democratic Party. She often challenged callers on KODI “Speak Your Piece.”

Pat is survived by daughter Vicki (John) Streeter of Cody; stepson Gary (Boots) Guymon of Evanston, Wyoming; daughter-in-law Lola Guymon of Mesquite, Nevada; sisters Jane Moffett of Sahuarita, Arizona, and Dolly Peak of Casper. She will be missed by her 14 grandchildren, 50 great-grandchildren and nine great-great-grandchildren.

Services to honor Pat will be held in the Wyoming Avenue chapel of The Church of Jesus Christ of Latter-day Saints on Wednesday, June 19, at 10:30 a.m. Burial will follow at Riverside Cemetery in Cody.

To send flowers to the family in memory of Patricia Jean Guymon, please visit our flower store.
Send a Sympathy Card