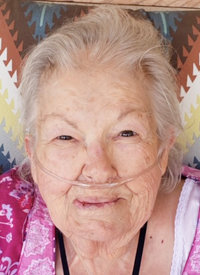 Pearl Ann has joined her husband, Russ, and her son, Lynn. She left this earth peacefully, in St. George, Utah, on Sept. 29, 2020, while holding her daughter Leann’s hand.

She was a strong and sometimes stubborn woman. She fought long and hard through the tragedies of the past two years and finally decided she’d had enough. She was tired and needed to go home. She missed Russ, Lynn, her parents, and her sister Ila.

Pearl Ann was born in Lovell, at her maternal grandmother’s house. She grew up on a large farm in Garland, Wyoming, near her paternal grandparents. She was the oldest of four girls and three boys. She had the usual farm upbringing, which included lots of work and times of great fun with siblings, cousins and friends.

She married Russell Snell on Nov. 12, 1950. They were later sealed for time and all eternity in the Salt Lake City Temple. Their oldest daughter, Leatha, was born the day after their first anniversary. She was followed by Lynn, Leann, Lyle, Marty and Jeff. There was a family joke that after Lyle was born, Pearl Ann’s mother refused to babysit if she gave another child an “L” name.

She was a complicated and fearless woman. She thought nothing of loading up her kids and driving her motorhome to visit family a thousand miles away. She was equally comfortable in a beet truck or her old standard transmission Plymouth station wagon.

She loved to travel and visited many of the places she had always read about, with Russ and many trips without him. On a driving trip to New York, Pennsylvania, Ohio and West Virginia, she visited the Sacred Grove, the Hill Cumora, and the Kirtland Temple. She was elated and humbled.

She was astute, observant, well-read, and insatiably curious — traits she passed on to her children, who also inherited her stubbornness. She only started slowing down when rheumatoid arthritis began affecting her physically. Her last year was spent in St George with Leann.

She leaves behind her children Leatha (Russ), Leann (Lisa), Lyle (Mehl Ree), Marty (Patti), and Jeff (Cindy); her daughter-in-law Janet (Lynn); her 15 grandchildren; 13 great-grandchildren; her sisters Rhonda Johns (Dave) and Barbara Hart Dodge; and her brothers Bill Hart and Larry Hart. She had many nieces and nephews who loved her and will miss her.

To send flowers to the family in memory of Pearl Ann Snell, please visit our flower store.
Send a Sympathy Card