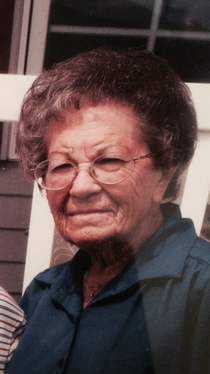 Phyllis Borders passed away peacefully on Friday April 21st, 2017 at the age of 91.
Phyllis was born on July 4th, 1925 in Lovell, Wyoming to Harrold and Lillian Hinkel.  She grew up with 4 sisters and 1 brother. Phyllis graduated from Lovell High School in 1943. She married Robert Borders on March 25th, 1944 in Columbus Montana and their marriage was sealed in the temple on August 23rd, 1951. She was the proud mother of 3 children; Ronnie, Caryl, and Cathi.
Phyllis helped her husband open two service stations and a bulk plant and did all of the bookwork for many years, allowing them to spend more time together.  Family was always a top priority for Phyllis.  Her and Bob traveled frequently to see their children and grandchildren as often as time would allow.
Phyllis was preceded in death by both of her parents, her husband Bob, her son Ronnie Borders, her siblings; Helen, Josephine, and Barbara, and her grandson Nicholas. She is survived by her brother Bob Hinkel, her daughters Caryl and Cathi, her daughter-in-law LuAnn, her 6 grandchildren, 11 great grandchildren, and 2 great-great grandchildren.
Phyllis was very active in her church and gave a great deal of her time to volunteer. She served in numerous positions over the years, including Stake Relief Society, Ward Relief Society, Stake Primary, Ward Primary President, along with the Cub Scouts and Stake Extraction Program. She also served as a ward librarian in Powell 1st Ward. She was very passionate about her beliefs and her involvement in the church.
A visitation service will be held on Monday, April 24th from 6 to 7:30pm at Thompsonâ€™s Funeral Home. Funeral services will be held at 10am on Tuesday, April 25th at the Church of Jesus Christ of Latter Day Saints located at 1026 Ave. E in Powell, Wyoming.
In lieu of flowers, the family has requested that you make a donation to your favorite charity in her name.

To send flowers to the family in memory of Phyllis Borders, please visit our flower store.
Send a Sympathy Card