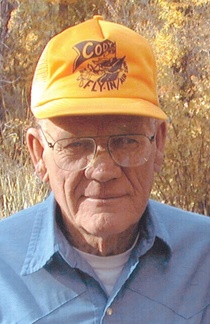 Powell native Ral William Hall died the morning of Friday, June 24, 2016. He was 82.
Ral was born April 11, 1934, in Powell, to William Hall and Jessie Bounds.
He attended local schools and graduated from Powell High School.
On Dec. 29, 1956, Ral married Sonya Marie Weitkamp, and the couple enjoyed nearly 60 years of marriage.
He served in the U.S. Army during the Korean War.
Ral worked as a farmer for many years. He was a model airplane enthusiast.
He is survived by his wife Sonya Marie Hall of Powell; sons and daughters-in-law Jeff and Brenda (Rhoades) Hall of Esterbrook, Wyoming, and Todd and Audrey (DuMonthier) Hall of Powell; daughters and sons-in-law Shannon (Hall) and Guy Draper of Helper, Utah, and Toni (Hall) and David Miller of Phoenix, Arizona. He also is survived by 12 grandchildren and one great-grandchild.
Memorial services will be held at 10 a.m. Tuesday, July 5, at Glad Tidings Assembly of God Church in Powell, with Pastor Mike Walsh officiating.
Honorary pallbearers will be Bill Ashby and Ralâ€™s grandsons Charlie Hall, Garrett Hall and Chris Miller.
Burial will be at Crown Hill Cemetery in Powell.
Memorials in Ralâ€™s name can be sent to Sonya Hall.
Thompson Funeral Home is assisting the family with arrangements.

To send flowers to the family in memory of Ral William Hall, please visit our flower store.
Send a Sympathy Card