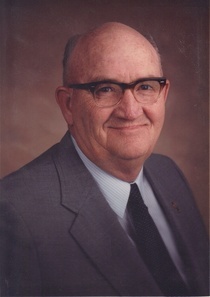 RALPH LEROY BORCHER
On February 13, 2014 the Lord heard Ralph â€œButchâ€ Borcherâ€™s prayers and took him home to heaven.  Born in Sidney, Nebraska on November 1, 1922 to Theodore and Dorothy (Bales) Borcher, the Borcher family moved to Powell, Wyoming in April of 1935.
Butch graduated from Powell High School in 1940.  He married Erma Wood on October 25, 1946; they had three children Keith, Marilyn, and Joyce.  Erma died of cancer on January 1, 1984.  As with every ending there is a beginning and he met and married Marlene Raasch on December 5, 1987.  Together they loved their family, church, and camping with all of their friends in the Polecat Ramblers.
Butch started working at the Big Horn Co-Op in 1946, was named manager of the Co-Op in 1962 and held that position until his retirement in 1985.
Ralph Borcher was the mayor of the City of Powell from 1984 until 1988 and held three terms as a city council member.  He was a member of the Powell Rotary Club since 1962, and was a sixty plus year member of the Odd Fellows Lodge.  He was past president and Chaplin of the Polecat Ramblers.  He spent many of his summers umpiring Babe Ruth and Legion baseball.  He was an avid follower of Powell Panther football and basketball and Powell Pioneer baseball.
He was a seventy-eight year member of the First United Methodist Church, was the church treasurer for over thirty years, and sang in the church choir for many years.  He most recently worshipped at the Bennett Creek Church in Clark and said there was no closer place to the Lord.
He leaves his wife Marlene, daughter Joyce (Brad) Ruward, his step-daughter Sandy (Bo) Greco, step-son Richard Raasch, grandchildren, Adam Mangold, Shea Mangold (and their father Scott Mangold), Tom Linville, Greg Linville, Candace Raasch, and Jennifer Gould and seven great grandchildren.  He also left his sister Mildred Emery, brother Merlin (Elaine) Borcher and numerous nieces and nephews.  He was preceded in death by his parents, wife Erma, his daughter Marilyn, his son Keith, his brother Richard Borcher, and his sister Elaine Knudson.
Funeral services will be held at the First United Methodist Church on Saturday, February 22, 2014 at 10:30 a.m.  Thompson Funeral Home is in charge of arrangements.  Memorial donations may be sent to the Powell Senior Citizen Center, Bennett Creek Church, or First United Methodist Church all in Powell Wyoming.
To send flowers to the family in memory of Ralph LeRoy Borcher, please visit our flower store.
Send a Sympathy Card