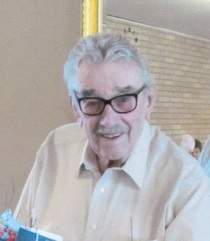 Ray was born in Ault, Colorado, the son of John Mefford and Ione Gohlmann Mefford on April 4, 1925.
At the young age of 8,  his parents were killed and he was sent to live at his paternal grandparents home, with their nine children in Ft. Collins, Colorado.  He attended school in Ft. Collins, graduating with the Class of 1943.
During his academic career he held the title of Student Body President and excelled in sports. While in High School he lettered every year in football and track. He played half-back and was co-captain of the Colorado State Championship Team in football and in track he ran the 100-yard dash in 9.8 seconds. His coach often told him he could â€œrun like the wind.â€ Football and fast pitch softball were his sports of choice and he was known in Powell as the pitcher that used no softball glove.
After graduation he joined the United States Navy and was deployed in the South Pacific as a middle gunner on a Navy PBY Bomber during WWII. Upon his discharge in 1946 Ray moved to Casper, and worked for Western Oil Tool, where he met and fell in love with Rosalie Stossel.
They were soon to be married in Casper on Oct. 1, 1946. Rayâ€™s new employers Bill Clark and Bill Mefford would send them to Newcastle.
They then moved to Powell, where they would make their new home and raise their children. Ray worked for Powell Machine under Bill Clark and Bill Mefford. In 1963, Ray partnered with Charles Jones and bought Powell Machine and renamed it Superior Machine. In 1965, Charles was bought out, and Ray and Rose ran Superior Machine until 1988.
Ray and Rose retired and son Gary Mefford took over the business and Superior Machine was sold in 2012.  One of Rayâ€™s biggest accomplishments was starting the Little League Baseball in Powell, along with friend, Judge John Dickson.
He would also sit on the City Council of Powell in 1966. Ray became a snowbird in 2001 and would spend the cold Wyoming winters in Phoenix, Arizona and come back to Powell for the summers.
In Phoenix, Ray met Gloria Goodall, who would become his companion for the next 13 years. Ray was an avid golfer with his brother Jack in Phoenix, and a phenomenal fly fisherman in Wyoming.
Ray especially loved hunting up at the family property in the Crandall Creek. Ray often spoke of this as â€œGodâ€™s Country.â€ Ray was preceded in death by his parents, grandparents, numerous aunts and uncles and cousins, his wife of 54 years Rose, grandson Paul, and daughter Melanie. His survivors include brother John G. â€œJackâ€ (Pauline) Mefford of Phoenix, Arizona; children, Linda (Ken) Jones of Blaine, Washington, and Gary (Debbie) Mefford of Powell.  Surviving grandchildren are Kendi (Josh) Lehman of Phoenix, Brandi Jones of Bellingham, Washington, Kassidy (Ben) Love of Napa, California, Justin Burt of Billings and Ryan Burt of Billings. Surviving great-grandchildren are Gracelynn Lehman of Phoenix, Tucker Stach of Bellingham, and Maverick Love of Napa.
Funeral services will be held Friday, May 8, at the Union Presbyterian Church at 10 a.m.
In memory of Ray, please feel free to donate to the Powell American Legion Baseball P.O. Box 57, Powell, WY, 82435.
To send flowers to the family in memory of Ray Willis Mefford, please visit our flower store.