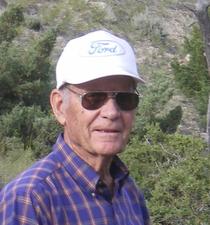 Richard â€œDickâ€ Pampe died of natural causes at 8:00 a.m. on February 29, 2016.  Born to Edward and Blanche Pampe on June 28, 1927 in Butler County, Kansas; he was 88.  He is survived by Janet, his wife of 57 years, his brother Robert, sons Richard (w/ Jill), Mark (w/ Robbie) and John (w/ Carolyn) and four grandchildren.  Dick grew up helping his dad work in the oil fields.  In 1945 he joined the Navy to serve in the Pacific Theater of WWII where he supported an amphibious landing on Japanese-controlled land to test if they had actually surrendered.  They had.  He later served in an amphibious landing role in Korea, where he made landings under fire to deliver fresh troops and pick up wounded.   After his military service, Dick bought a 1939 Harley for $95 and returned to college.  He graduated with a degree in Mechanical Engineering from the University of Oklahoma.  In 1952 he traveled to Alice Texas with nothing but a suitcase and started his career with Dowell.  Along the way he was smitten by Janet Stein, a farmerâ€™s daughter from Illinois.  They were married on June 3, 1958.  Work took Dick and his bride to Wyoming, where they raised sons Richard, Mark and John.  Dick was a lifetime member of the National Rifle Association, and a volunteer and member of the United Methodist Church in Powell.  Dick was an accomplished marksman, earning countless trophies and titles in competitive pistol shooting.  With a love of shooting and a love of the great outdoors, he was an avid hunter and fisher with his sons and friends.  Dick is remembered as a hard worker, sharp shooter, fair and honest, and a devoted husband and father.  He will be greatly missed.
Services will be held at two oâ€™clock on Saturday, March 12 at the United Methodist Church in Powell.  Open viewing is before the service at one oâ€™clock, with a reception to follow the service.
To send flowers to the family in memory of Richard Eugene Pampe, please visit our flower store.
Send a Sympathy Card