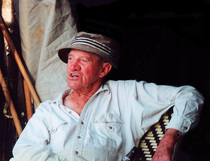 Robert Vernon "Chris" Fulton officially retired from farming on September 2, 2016 and was forced to hang up his backpack sprayer, abandon his "rock picking" duties, and say goodbye to friends and family.  It was a source of great pride to him that at 94, he was one of the oldest of the original Heart Mountain community still living on the farm. Though they know he deserves the rest, his family will forever miss his quick smile, gentle soul and caring heart.

Born October 28, 1921 on a farm in Stratton, CO to Roy and Alice (Shoemaker) Fulton, he was the ninth of ten rambunctious children. Roy was tall and firm; Alice was short and soft, with personalities to match.  On her lap, Chris learned her gentle, Christian ways and quiet humor.  She always held a special place in his heart along with his older sisters who doted on the tot and often protected him from the mischievous pranks of his brothers.  When Chris was four, an uncle in Oregon inspired the family to move there.  The moist climate there, however, was difficult for a sister with asthma, so in July 1928, the family moved to Powell and farmed the Shoemaker place north of Powell. Chris attended Powell schools and graduated in 1940.

After high school, he worked odd jobs throughout Wyoming, Oregon and Washington before joining the army in July 1942 where he served as an airplane mechanic in the European theater of operations. He finished serving his country in 1946, and from the skies over England and Germany, flew home to Wyoming where he courted and married Maxine Sand on June 5, 1947.  She was only 15 years old to his 25, but her parents knew she'd be in good hands because they had another daughter who had already married one of the Fulton boys.

He worked briefly as a gas station attendant, but as is so often true, "you can take the boy off the farm, but you can't take the farm out of the boy," and in 1953, he realized his dream and bought the Ransier -and later the Avery-farms on Heart Mountain where he raised barley, beans and babies. Five fortunate children were born of their union: Phil, Iva Lee, Cindy, Christie and Julie.

His children remember him as a quiet man with simple needs. What he wanted was a fine stand of grain, and a good crop of kids who didn't give their mother too much grief. Some years were better than others in both respects. From him they learned the value of hard work, the importance of honesty and integrity, an appreciation of nature's gifts, and the joy of strong family ties.

He is survived by his wife of 69 years Maxine, son Phil Fulton (â€œSamâ€), daughters Iva Lee McAlmond (Scott), Cindy Shumway (Rich), Christie Maggard (Jay), Julie Norberg (Rick) all of Powell; eleven grandchildren, nine great-grandchildren, and numerous nieces and nephews.
He was preceded in death by his parents; five brothers, Jim, Maurice, Tom, "Dock," and Jack; and four sisters, Esther, Verdie, Pauline, and Lucille. As hard as each successive loss was for him, it broke his heart that he was also preceded in death by grandson Jeremy McAlmond.
A celebration of Chrisâ€™s life and luncheon will be held at the Heart Mountain Clubhouse on Sunday, September 11th between 1:00 and 4:00 pm.

To send flowers to the family in memory of Robert Vernon "Chris" Fulton, please visit our flower store.
Send a Sympathy Card