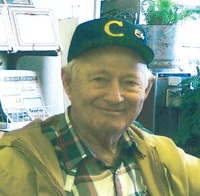 Robert Francis Hansen was born September 4, 1930 to Julius Earl Hansen and Ruby Mae Copeland in Lovell, Wyoming at the Hans Hansen Ranch.  He was the oldest of six children.  As a young teen he went to live with his grandmother Sarah Hansen on the ranch.  There he learned farming and ranching.  He also worked for his father in the oil field building reservoirs in various locations.

He married Thora Ada â€œTeddyâ€ Baldwin on March 4, 1951.  They are the parents of three children: Terri Lee, Robbie Ann, and Robert Scott.  In 1959, Bob sold all of his cattle and went into the trucking business.  He owned and operated Hansen Trucking until 1970.  That year he leased his truck to Dick Jones Trucking Company in Powell after which the family moved to Powell. Bob worked for Jones until 1989 and then he sold his truck and worked in construction for the next 25 years until his health started to fail.

Bob was a cowboy and proud to have followed in the footsteps of his uncles.  He enjoyed having coffee with his friends, ranching, farming, gardening, working on his trucks, welding on his equipment, splitting wood and building trailers.  He always seemed to have a project in the works of one kind or another.  He loved trucking and has driven millions of miles.  It was in his blood; he could not sit still.  He had to always be going somewhere.  He also loved his animals, especially his dogs. One of Bobâ€™s favorite things was to tell stories of his life as a cowboy herding cattle on the mountain or at the family ranch in Dry Head, MT with his uncles.

Bob passed away on December 2, 2013 in the Powell Valley Hospital after a short illness.  He was 83.  He is preceded in death by his parents, his sister, Sarah Jane Hansen, his son, Robert Scott Hansen, and his daughter, Robbie Ann Hansen.

Services will be held at the Church of Jesus Christ of Latter-day Saints on Ave. E in Powell on Friday, December 6, 2013 at 10:00am. The viewing will be at 9:00am in the Relief Society Room with the interment at the Lovell Cemetery.

To send flowers to the family in memory of Robert F Hansen, please visit our flower store.
Send a Sympathy Card