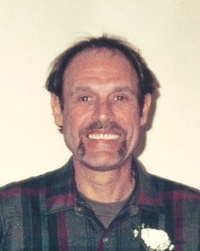 Robert E. (Nelson) Morrison, 62, passed away unexpectedly on Sunday, October 6, 2013.
Bob was born February 13, 1951 in Powell to Thomas and Darlene (Cline) Nelson.Â  Thomas passed away in 1954 when Bob was just 3 years old.Â  Later that year Darlene married Harold H. Morrison of Cody and Harold adopted Bob and older sister Rebecca.Â  The family resided in Powell and Bob soon became a big brother to Rodney and Roland.
He attended school in Powell and graduated from Powell High School in 1969.Â  He loved playing football and basketball for the Panthers and was also a member of the 1970 Northwest College Trapper basketball team.Â  He joined the Navy in 1972 and served overseas as a Sea Bee until his discharge in 1976.Â
Upon returning to Powell, Bob entered the construction trade working alongside friends building homes in the Cody area. Spending much of his time outdoors, he enjoyed camping and pack trips with friends and family.Â
Bob married Amy Sagrilla of Powell on June 7, 1981 and they soon welcomed their daughter Mandy.Â  Bob was a proud and deeply devoted father.
Bob married Norma Alvarez Knapp of Cody on November 9, 1996 and the couple happily made their home together in Ralston.
Bob was an avid reader with a special interest in military history.Â Â He enjoyed learning of family history at family gatherings through the storytellers of his elder generations.Â  Bob was proud and honored to be a grandfather and delighted in the time he spent with his five grandsons.Â  He took special pride in flower gardening and enjoyed spending quiet time at home with his wife Norma.
Bob is survived by his wife Norma, daughter Mandy Edwards and husband Brian of Billings, stepdaughter Lisa Bangart and husband Butch of Powell, sister Becky Lohrenz and husband Jerry of Ralston, brothers Rod Morrison and wife Lynn of Powell and Roland Morrison of Billings, five grandsons Tanner, Parker, Hayden, Nathan and Gavin as well as numerous aunts, uncles, nieces, nephews and cousins.
Bob was preceded in death by his parents.
Memorial services will be conducted at Thompson Funeral Home in Powell at 10:30 a.m. on Saturday, October 12, 2013 with a reception following in the Bicentennial Hall at the fairgrounds.Â

To send flowers to the family in memory of Robert Edward Morrison, please visit our flower store.
Send a Sympathy Card